In May 1985 my wife Dianne, son Amos and I moved to Pelham, then a small suburban town south of Birmingham. The town was just beginning to grow rapidly as part of the population explosion in northern Shelby County underway at that time.

Although not incorporated until 1964, a town called Pelham had existed since the 1870s; a post office opened there in 1873. As Shelbyville a town had occupied the location since the creation of Shelby County in February 1818 in the Alabama Territory and served as county seat until it was moved to Columbiana in 1826. After the Civil War the name was changed to recognize Confederate hero John Pelham, who was a native of Calhoun County.

A fascinating snapshot of the area in the mid-1880s can be found via the magic of Google Books, the City Directory of Birmingham and Gazetteer of Surrounding Section for 1884-5. 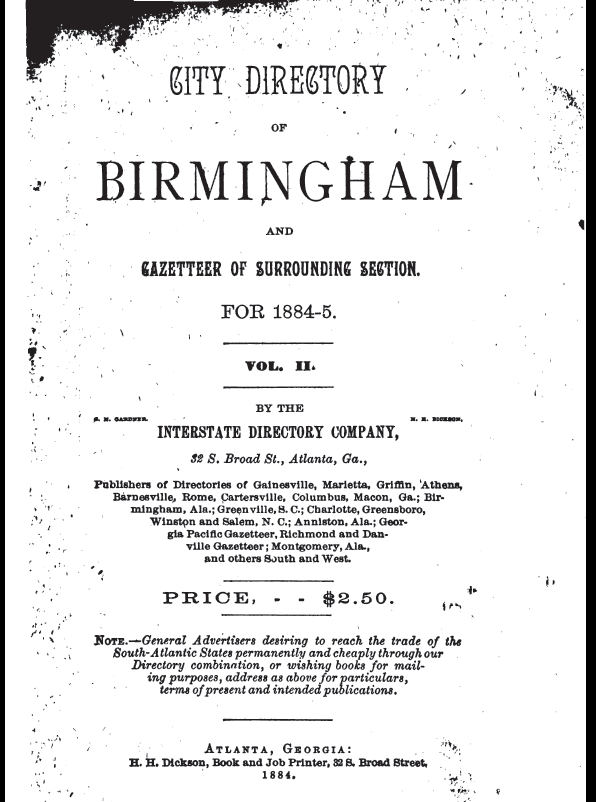 On page 328 of Volume II of that publication, we can find a short listing for little Pelham: 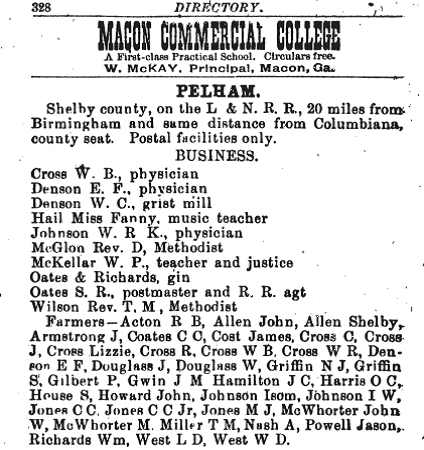 Here we get some sense of what the town was like 130 years ago. The L&N Railroad came through Pelham, which we learn was some 20 miles south of Birmingham and the same north of Columbiana. The trains dropped off and picked up the mail and perhaps freight at Pelham, but there was no passenger service ["Postal facilities only"].
At that time S.R. Oates was the postmaster and L&N agent. According to this listing, Pelham had three physicians and two Methodist ministers. Two of the physicians also farmed, which was not unusual at the time. Doctors in rural areas and small towns were seldom able to make a living from their practice alone. Even many physicians in cities also operated drug stores to make ends meet.
Businesses in Pelham at this time included the Oates & Richards cotton gin and a grist mill operated by another of the farmers, W.C. Denson. Also interesting to note is W.P. McKellar, a teacher and justice [of the peace?] and Miss Fanny Hall, a music teacher.
The two teachers may have given private lessons, but they may also have taught in Rutherford High School, Pelham's first school. Built in 1872, the facility lasted until a storm destroyed it in 1909. You can find out more about the history of Pelham schools in my article on page 36 of the Spring 2014 issue of the Pelham City News.
I'll be exploring the history of Pelham--and the entire area--in future posts. I would recommend a perusal of the City Directory discussed here to anyone who would enjoy such an historical snapshot. The ads for businesses long gone are alone worth the effort!
Oh, and one more thing. What's up with that Pelham on Highway 42 in northern Choctaw County??
Posted by AlabamaYesterdays at 9:32 AM