Part 1 of this series can be found here and part 2 here.

A third silent film shot in the Birmingham area was Men of Steel, filmed in Ensley and released on Sunday, July 11, 1926. An advertising tag line used for the film was a modest one: “One of the Greatest Pictures ever produced.” All the details of international distribution are unknown, but the film did appear in Portugal in December 1927 and Finland in February 1928. Running time for the film is given by various sources as 96 or 100 minutes.

The film premiered in New York City at the Mark Strand Theatre on Broadway. Opened in 1914 with a capacity of 2,989 people, the Strand managed to survive as a cinema in one form or another until it was demolished in early 1987.  In its review the next day, the New York Times noted about the film that “all the stupendous paraphernalia of a steel plant has been used, with the happy result of making that fascinating industry vivid without sacrificing narrative in the picture.”

This picture was a First National production. The company had been founded in 1917 when 26 of the largest cinema chains in the United States merged and created one chain of more than 600 theaters. Thomas L. Tally was the guiding force behind this effort, which was intended to compete with dominate Paramount Pictures. First National would produce, distribute and exhibit its own films.

Quickly the firm signed Mary Pickford and Charlie Chaplin to the first million-dollar contracts in film history. In 1928 Warner Brothers bought a controlling interest in First National and continued production under its banner until 1936. Among the almost 400 productions the company released were such classics as So Big (1924, based on Edna Ferber’s bestselling novel), The Lost World (1925, based on the Arthur Conan Doyle novel), and Little Caesar (1931, from W.R. Burnett’s novel), one of the early gangster classics with Edward G. Robinson. 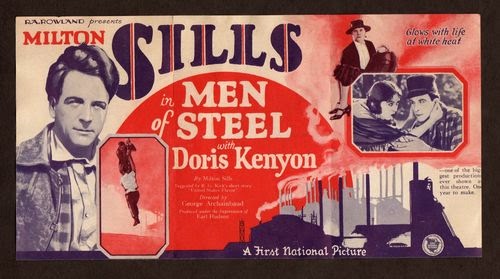 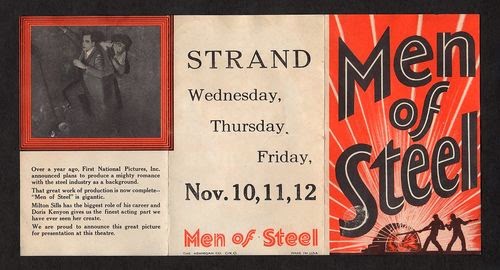 Movie herald for Men of Steel. These two-sided pieces were included in film press kits and copies were provided to individual theaters to hand them out on the street, etc.

Men of Steel was based on a short story, “United States Flavor” written by Ralph G. Kirk and published in the Saturday Evening Post issue of June 14, 1924. Kirk was born in Harrisburg, Pennsylvania in 1881 and died in 1960 in San Diego, California. Between 1921 and 1953, mostly in the 1920s and 1930s, he published numerous short stories, most of them in the Post. In 1923 he published a book, Six Breeds, a collection of five dog stories, including two that had been published in separate editions in 1917 and 1918. A 1922 film, The Scrapper, was based on his story “Malloy Campeador.” Little else is known at the moment about Kirk, and I haven’t seen the story yet and don’t know if it is set in Birmingham. Since Kirk was from another steel producing state, the story may be set there. Why Birmingham was chosen for a filming location is currently unknown. 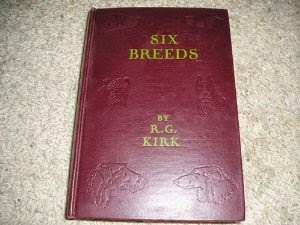 Cover of a book by R.G. Kirk

The Film Daily, a trade newspaper that covered the film and later television industries from 1915 until 1970, ran a front page column-long review of Men of Steel in its issue for Tuesday, July 13, 1926. “The picture has a punch that reaches wallop proportions at several climaxes,” reviewer Kann gushed. “’Men of Steel’ impresses,” he concludes. Unfortunately, the review makes no mention of filming in Birmingham. The same issue of the paper also contains a two-page advertisement for the film, crowing that “N.Y. Strand Busts Town Wide Open with ‘Men of Steel.’” The ad also reproduces a telegram from the Strand’s Joseph Plunkett who wrote breathlessly to executive Richard A. Rowland that “WE HAD TO STOP SELLING TICKETS FOUR TIMES STOP AUDIENCE VERY ENTHUSIASTIC.”

I have not been able to locate an image of the movie’s poster for use at theaters, but an article by Mark Caro published in the Chicago Tribune on March 13, 2012, gives us a few hints about its quality. Caro profiles Dwight Cleveland, who has amassed a collection of more than 35,000 such posters. Cleveland mentions “a brilliantly colored poster touting Milton Sills in "Men of Steel" (1926) and depicting one guy punching another in the face.  To Cleveland, ‘Men of Steel’ illustrates a key problem with his hobby. Although Sills and that silent film are long forgotten, the poster is a beautiful stone lithograph that the collector argues should be judged on its artistic merits. ‘That's a poster that should sell for 10,000 bucks at some point, when people really understand how important the artwork is,’ Cleveland said. ‘Then they'll realize this is a great example of early lithography, and it will rise. Now if it's just going to be valued by movie people, they're not going to think it's so important.’"

Men of Steel was directed by George Archainbaud, an actor and manager who came to the U.S. from France in 1915. Before his death in 1959, he had worked primarily as a director in silent and sound films and television. He is perhaps best remembered today for several westerns, including some featuring Hopalong Cassidy. In 1932 he directed The Lost Squadron, in which three World War I aviators find jobs as stunt flyers in Hollywood after the war.

The male lead in Men of Steel was Milton Sills, a popular star of the time; the movie was one of four he made in 1926 alone. Sills also wrote the script for the film based on Kirk’s short story. Born in Chicago in 1882, he attended the University of Chicago and worked there after graduation. In 1905 he joined a stock theater company and toured the country before settling in New York and making his Broadway debut in 1908. By 1914 Sills had moved to Hollywood for his film debut in The Pit. By the time he arrived in Birmingham his success put him in films of the largest studios and opposite such stars as Gloria Swanson and in such box-office hits as The Sea Hawk (1924). In 1927 Sills was among the 36 people who founded the Academy of Motion Picture Arts and Sciences. 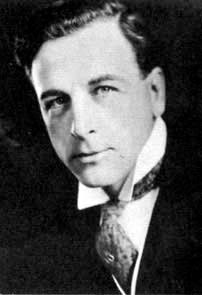 Staring opposite Sills was Dorothy Kenyon, a native of New York who was fifteen years younger. She made her first film in 1915 and by 1924 appeared in Monsieur Beaucaire with Rudolph Valentino. She continued to act in films well into the sound period and had a few television appearances in the late 1950s. She died in 1979.  Sills and Kenyon carried their relationship beyond the set in Birmingham; they were married in October 1926 and had a son before Sills' death from a heart attack in 1930. 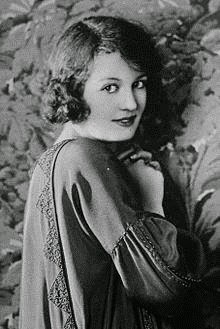 Other individuals acting in the production included Victor McLaglen, May Allison and Frank Currier. Born in England in 1886, McLaglen served in World War I after several years on the boxing circuit. He even fought heavyweight champion Jack Johnson in an exhibition match. McLaglen acted in several silent films in Britain before moving to Hollywood where he quickly became a popular character actor, often playing intoxicated Irishmen. He was still acting in films and television until his death in 1959. His son Andrew McLaglen became a director in both film and television. 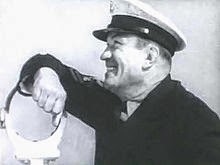 Georgia native May Allison appeared on Broadway in 1914 but quickly moved to Hollywood. She became very popular in a series of some 25 films with leading man Harold Lockwood. However, his death in 1918 during the influenza pandemic resulted in a decline in the public’s interest in her. Allison made her final film, The Telephone Girl, the year after Men of Steel and then retired. She died in 1989. 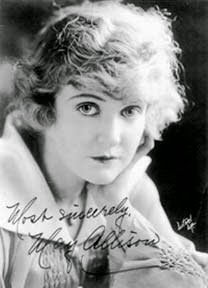 Born in Connecticut in 1857, Frank Currier acted in more than 130 films between 1912 and 1928. He also directed a number of films during that period.  He appeared in such silent classics as Ben-Hur and died in 1928.

A synopsis of the film’s story by Hal Erickson can be found online at the allmovie.com site. “Sills plays Jan Bokak, a self-educated steelworker who finds himself in the middle of a romantic triangle. Two different girls -- wealthy socialite Claire Pitt (May Allison) and blue-collar worker Mary Berwick (Doris Kenyon) -- simultaneously fall for Bokak. It later develops that Claire and Mary are actually sisters, the first of a series of surprising plot twists leading to Bokak being accused of a murder he didn't commit. In the gutsy climax, the actual villain attempts to kill Bokak by pouring a vat of molten steel upon him!”

According to BhamWiki.com, Men of Steel premiered at the Franklin Theatre in Ensley, although no date is given. Located at 1819 Avenue E, the theatre was built in the early 1900s and closed in the early 1930s. The building remains vacant today.

All three of these silent films made in the Birmingham area—Moonshiner’s Daughter, Coming Through, and Men of Steel—are among the many “lost” films of the silent era. Martin Scorsese’s Film Foundation has estimated that 90 percent of films made before 1929 are lost. These movies were made on nitrate film, which is highly flammable and chemically unstable. Improperly stored, these films can turn to toxic mush or powder in the canister. Sometimes "lost" silent films will surface in various unexpected places. In 2010, the Russian state film archive gave the Library of Congress copies of ten U.S. silent films believed lost but discovered in storage.

Little is known about the local details of making these three silent movies. Hopefully some research in Birmingham area newspapers will uncover further information.


If you would like to learn more about silent filmmaking, the print literature and web resources are vast. My own interest was sparked years ago by Kevin Brownlow’s book, The Parade’s Gone By [1976], an excellent place to start.

This piece first appeared on the Birmingham History Center's blog in May 2013.
Posted by AlabamaYesterdays at 8:23 AM