Part 1 of this series can be found here; part 2 here; and part 3 here.


We don’t consider Birmingham a hotbed of silent filmmaking because it wasn’t. Yet three feature films were made in the area before the movies learned to talk. In recent posts on this blog I’ve discussed each of these films in some detail: The Moonshiner’s Daughter [1908?], Coming Through [1925] and Men of Steel [1926]. Since those pieces were written I’ve come across more information about the production of Men of Steel and would like to share it here.

By way of introduction, let me quote myself on the South’s role in silent film production. “Silent filmmaking arrived in the South very early in the twentieth century. Beginning in 1908, the Kalem Company operated in Jacksonville, Florida, each winter. At least eight films were made between 1916 and 1926 at Norman Studios, also in Jacksonville; all featured totally black casts. For about a decade until 1919, when most filming had moved from the northeast to California, Florida was known as the “Winter Film Capitol of the World.” In addition, the very first Tarzan film, Tarzan of the Apes staring Elmo Lincoln, was shot in Louisiana in 1918.”

Men of Steel was filmed in Ensley and released by the First National company in July 1926. The premier was held at the Mark Strand Theatre on Broadway in New York City. The studio’s advertising declared it “One of the Greatest Pictures ever produced.”  Directed by George Archainbaud, the film’s cast included three popular stars of the day: Milton Sills, Dorothy Kenyon and Victor McLaglen. Kenyon and Sills married just months after the film was released. According to the BhamWiki site, the local premier took place at the Franklin Theatre in Ensley. 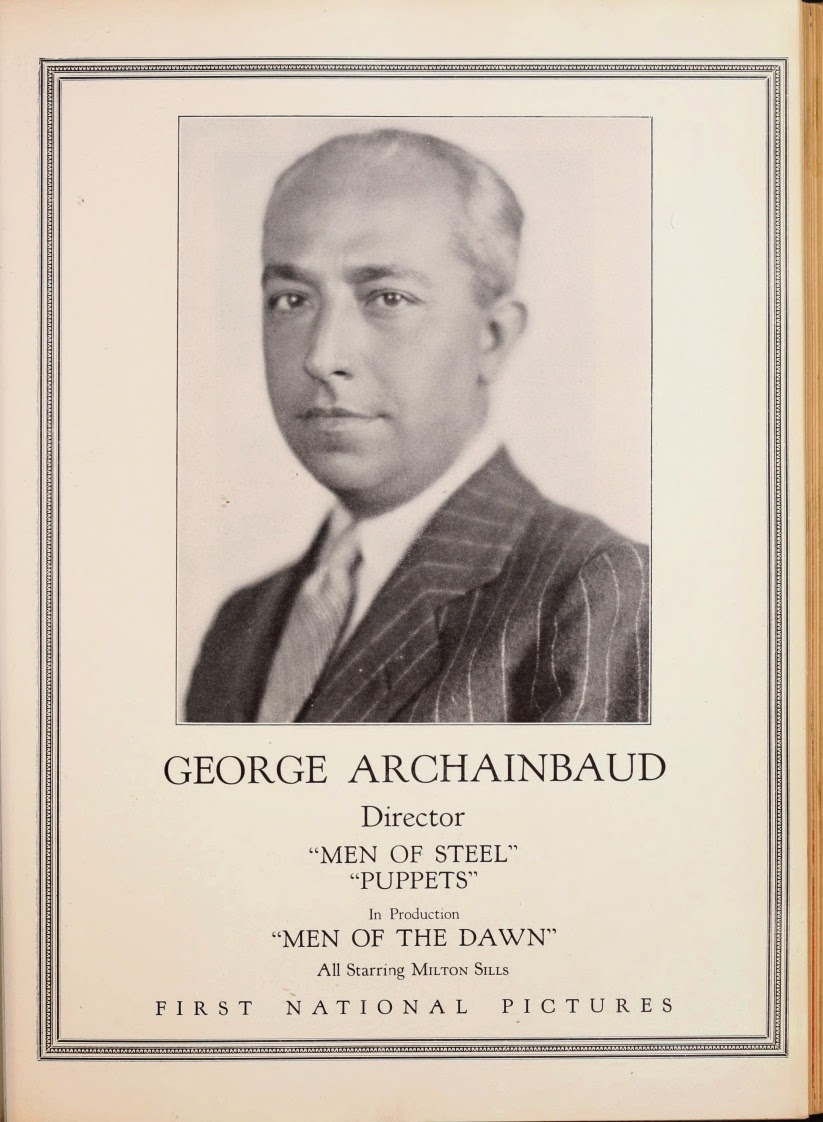 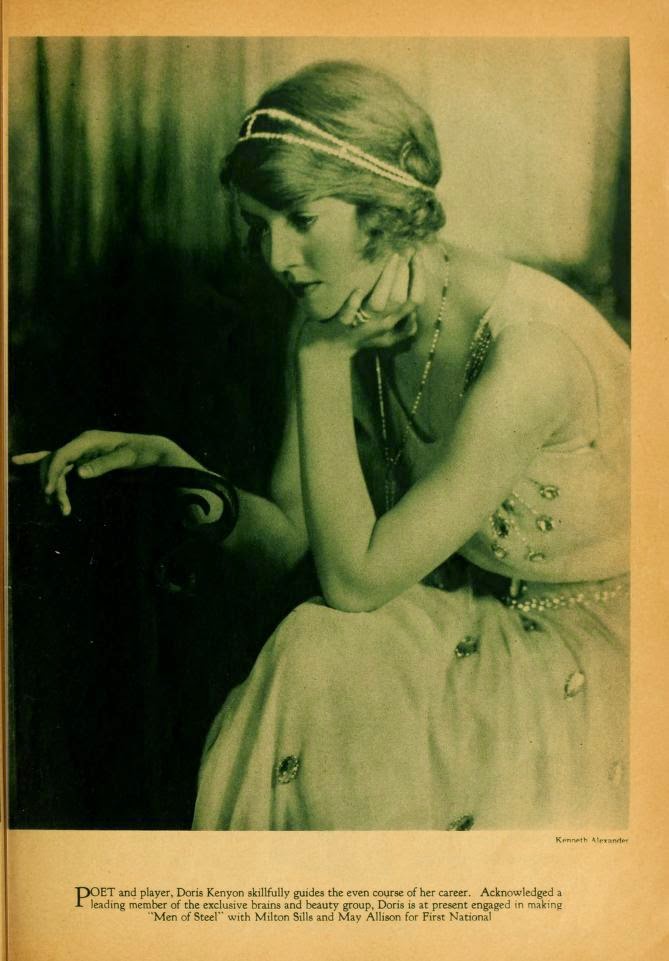 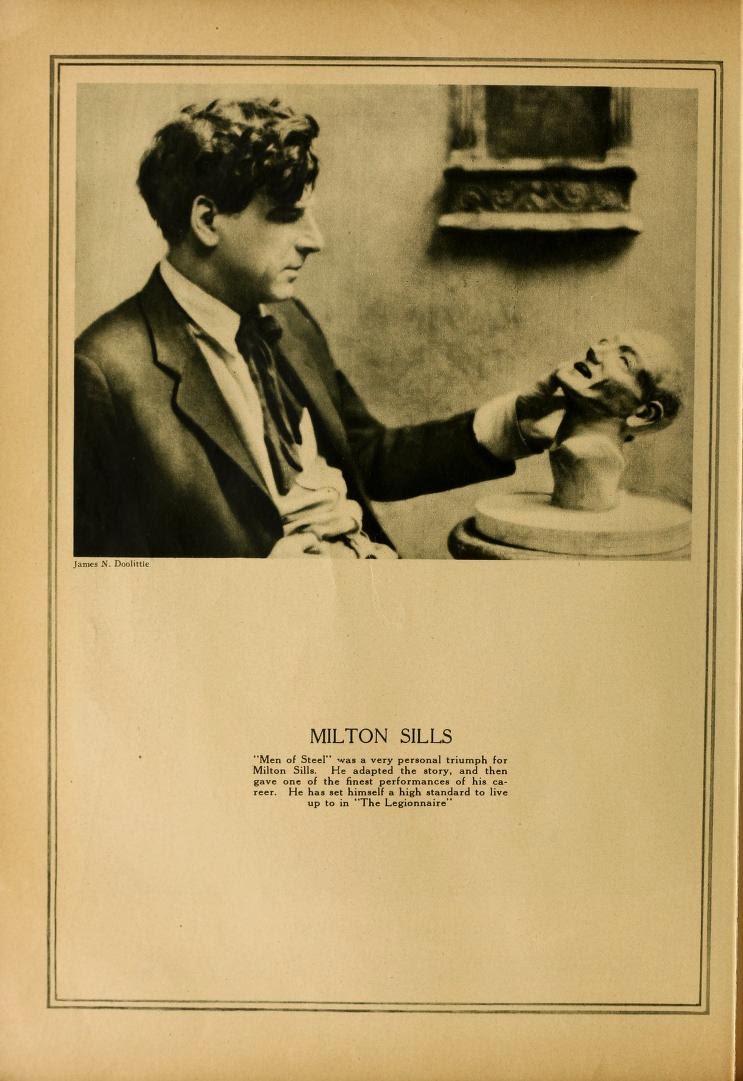 A copy has not survived, but the film seems to have been just over 90 minutes long. Men of Steel was based on a short story, “United States Flavor” written by Ralph G. Kirk and published in a Saturday Evening Post issue in 1924. I have yet to determine whether the story is set in Birmingham or why the city was chosen for filming.

As I noted in the earlier piece, “A synopsis of the film’s story by Hal Erickson can be found online at the allmovie.com site. ‘Sills plays Jan Bokak, a self-educated steelworker who finds himself in the middle of a romantic triangle. Two different girls -- wealthy socialite Claire Pitt (May Allison) and blue-collar worker Mary Berwick (Doris Kenyon) -- simultaneously fall for Bokak. It later develops that Claire and Mary are actually sisters, the first of a series of surprising plot twists leading to Bokak being accused of a murder he didn't commit. In the gutsy climax, the actual villain attempts to kill Bokak by pouring a vat of molten steel upon him!’”  That summary probably came from advertising material. 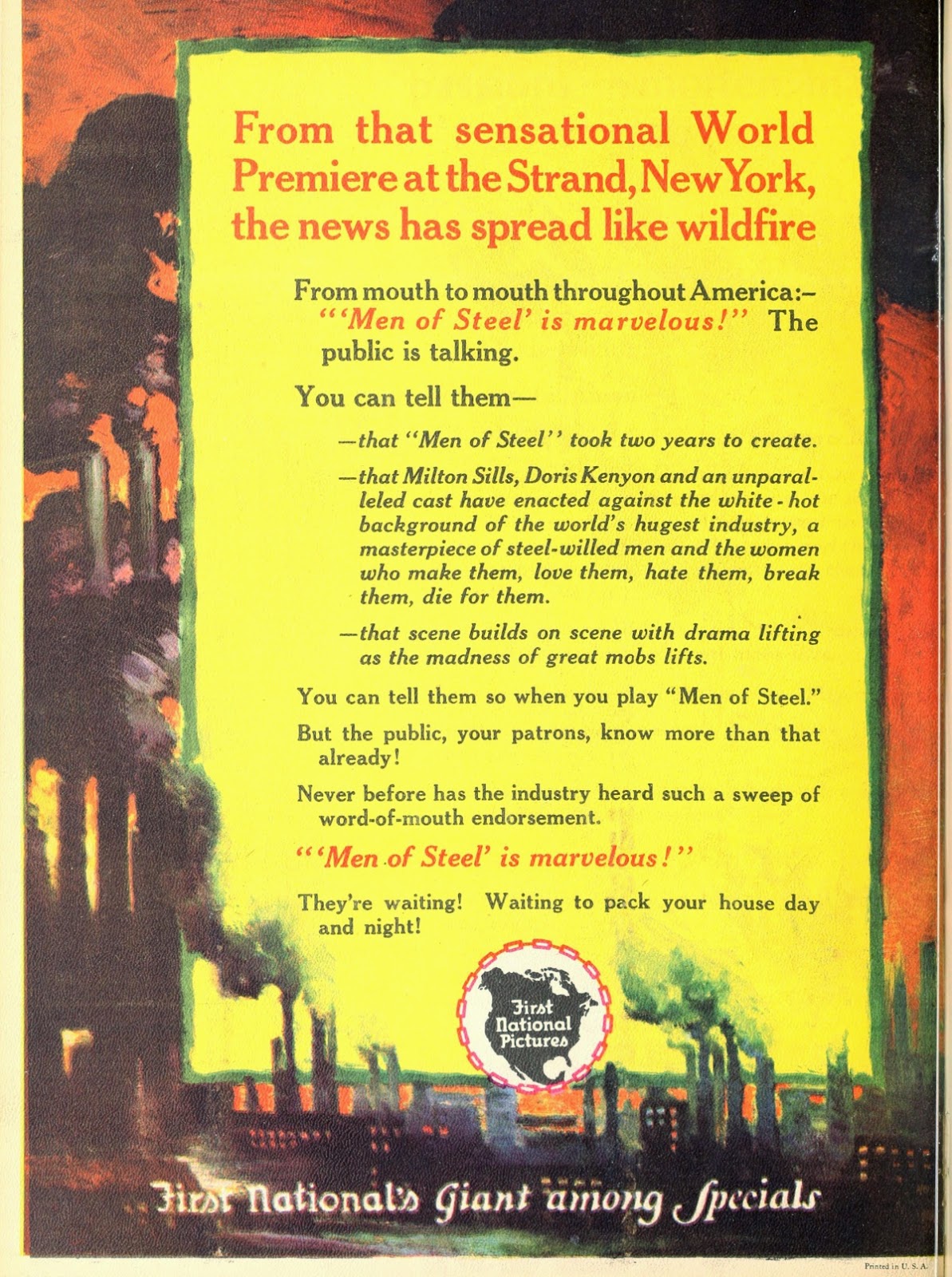 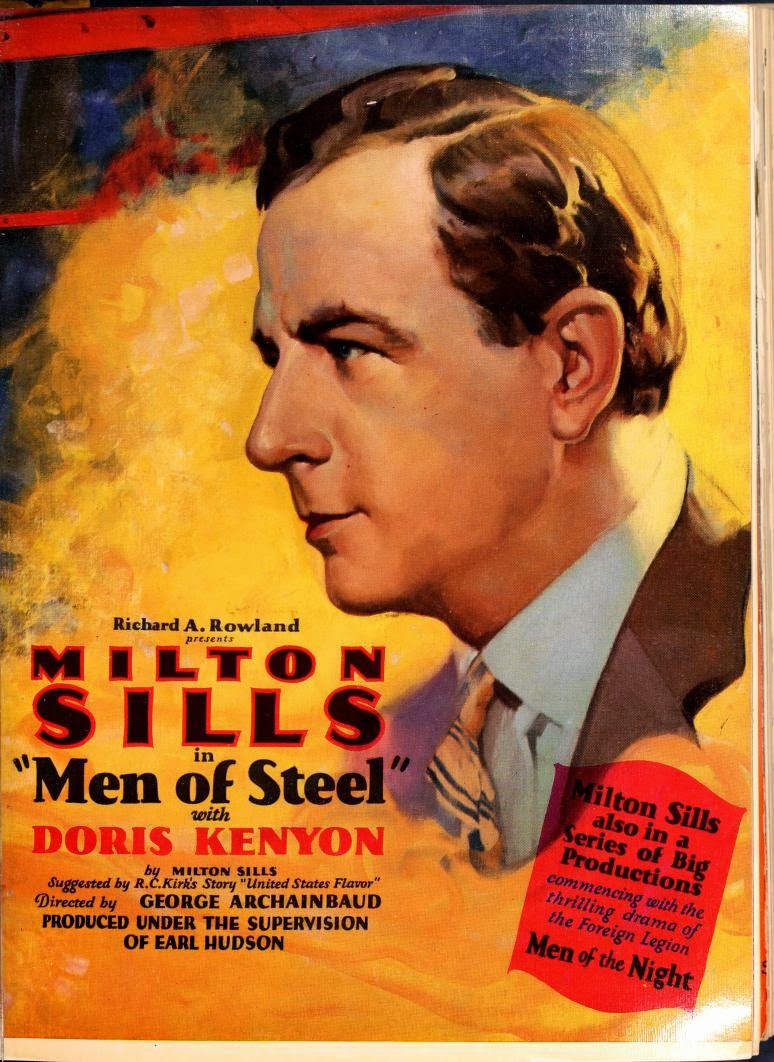 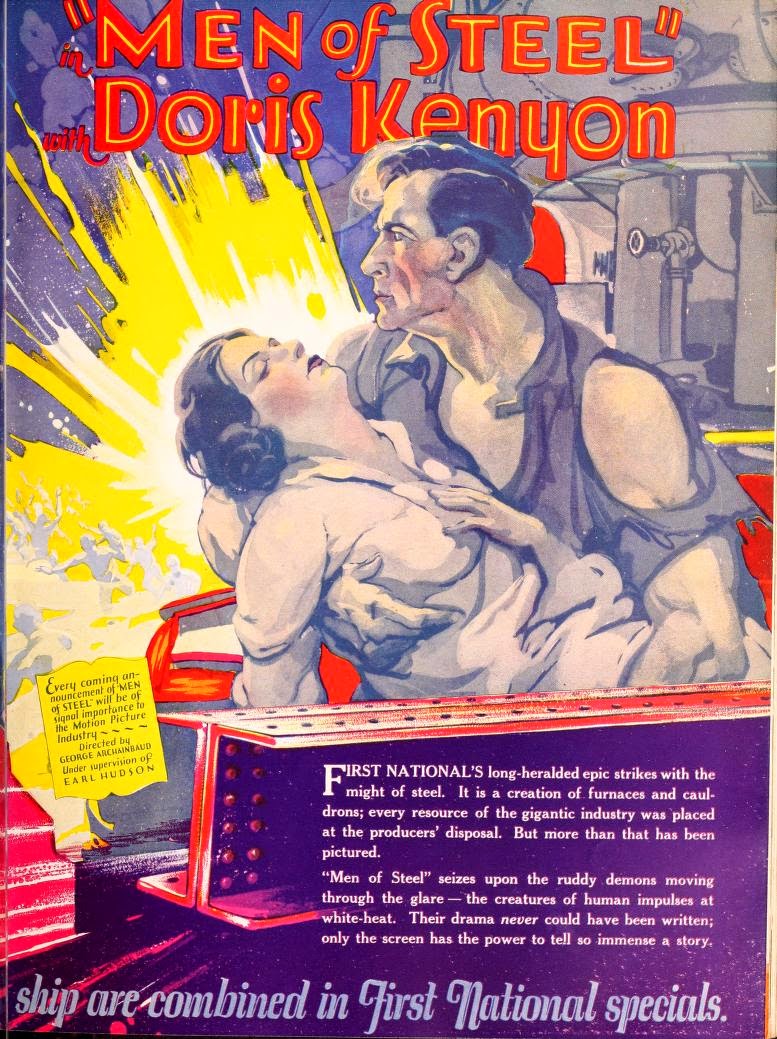 Shortly after I completed the original Men of Steel piece, a new digital resource became available—Lantern, the Media History Digital Library. Included here are numerous issues of 20th century magazines related to film, television and radio.  I hope to use this resource to investigate the other two films, but for now I’ve included some of the photographs and advertisements related to Men of Steel I found in Lantern. Of special interest is the photo taken on the set at the Ensley Mills with what must be director Archainbaud, some of his crew and a camera high above one of the vats. Note the man in the vat and the clothing worn by the men. I wonder what the city’s temperature was that day? Maybe they were filming in winter. 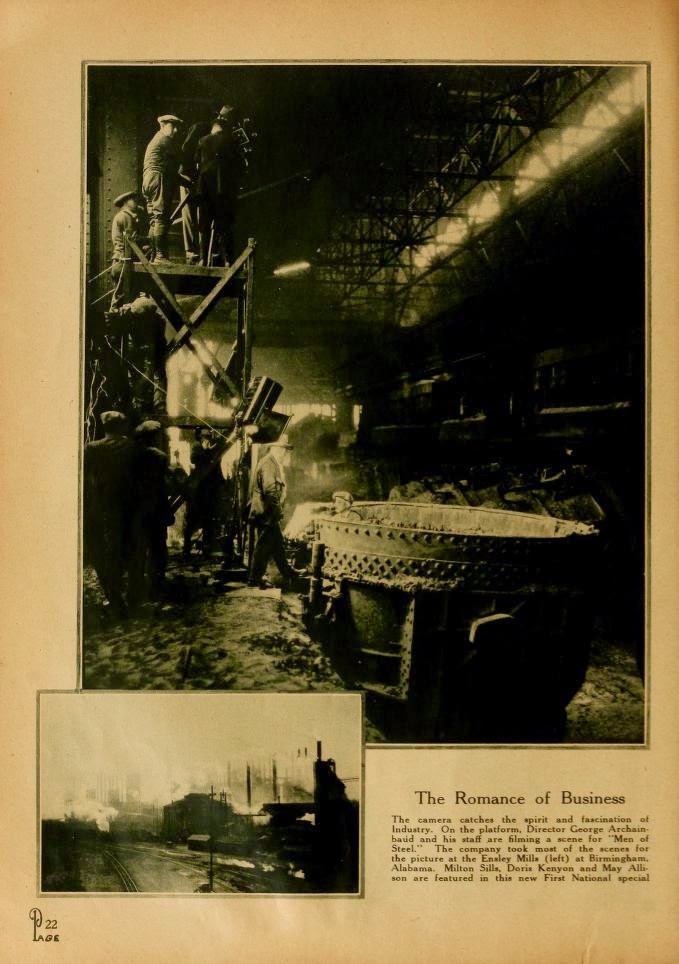 Finally, I’ve included something else on the subject of Birmingham’s silent film history. This clipping from the Birmingham News published on April 28, 1925 is online at the Birmingham Public Library’s DigitalCollections. The article describes the release of a silent film made by the Imperial Film Company, Things You Ought to Know about Birmingham. Being shown at the Trianon Theater, it “shows more than one thousand Birmingham citizens” and “many local scenes and places.” Yet another fascinating topic for research! 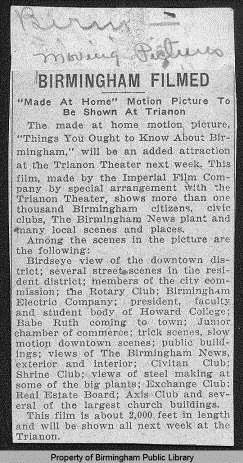 This piece originally appeared on the DiscoverBirmingham.org site in November 2013.
Posted by AlabamaYesterdays at 9:29 AM