This past July my brother Richard and I made one of our annual trips seeking Alabama and family history.

This time we were in east central Alabama mainly around Brundidge and Camp Hill. We visited several other places I've already written about such as Smuteye, Union Springs and Aberfoil.

The first post on the Camp Hill visit is here. I'll be doing a future post on Tallassee. A decade or more ago mom and her two sisters, Heth and Marjorie, made a similar trip to Brundidge and Camp Hill; some things have changed, others not so much. 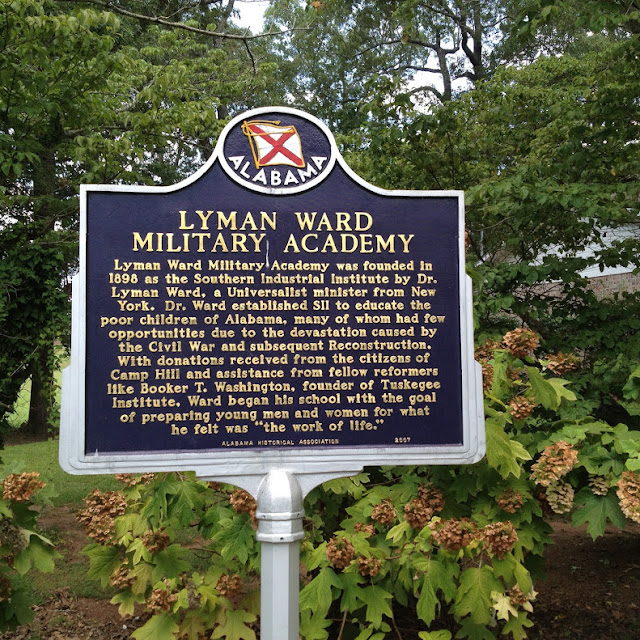 The military school is one of the few bright spots left in Camp Hill. 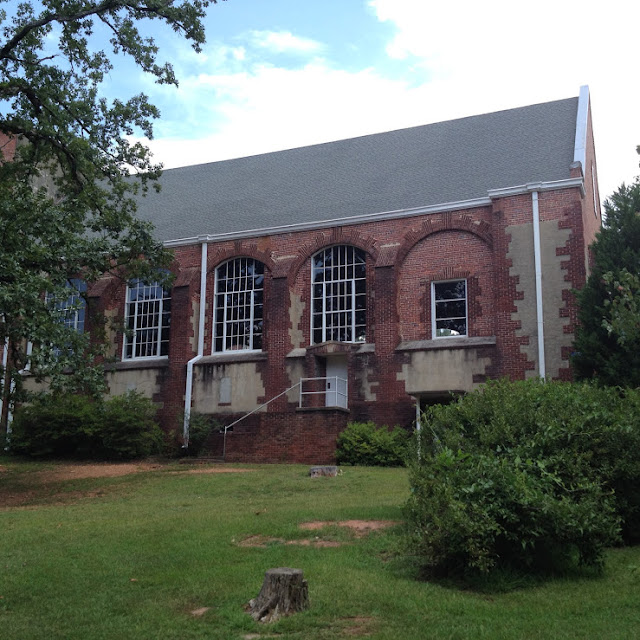 Front view of the former auditorium that's now a gym. In a previous post on this blog I've talked about the time mom saw George Washington Carver speak at the Sourthern Industrial Institute in a big auditorium that is now apparently this gym. 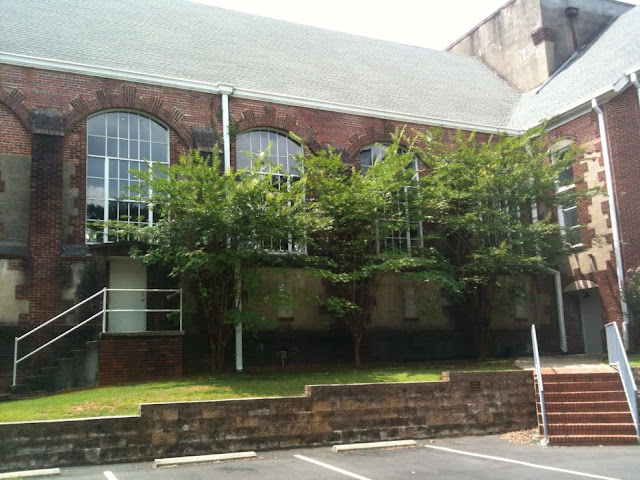 Back view of the gym 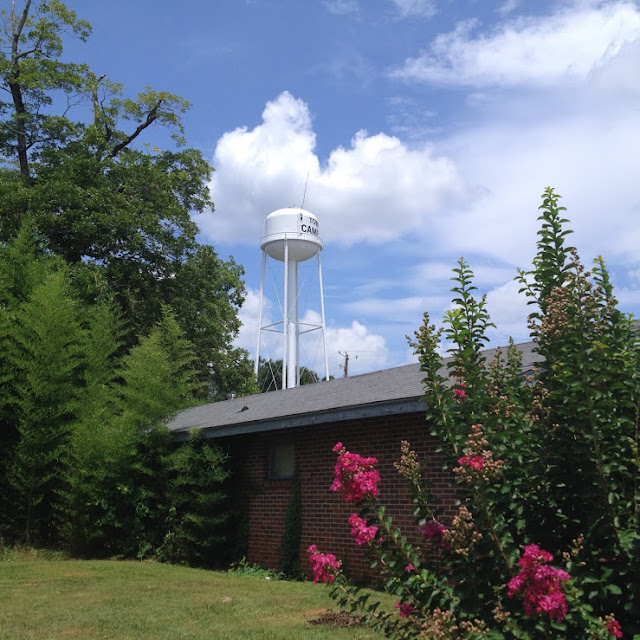 This water tower is a landmark in the area. There is a family story in which mom's older brother John climbed the water tower in Camp Hill when he was about 10 years old. He apparently decided not to come down, and soon the sheriff appeared at the parsonage to inform my grandfather, John Miller Shores, the Methodist minister. Rev. Shores had to climb the tower and bring his son down. Her father later told mom that time was the most scared he'd ever been in his life. That water tower seems to be gone now, replaced by this more modern one. 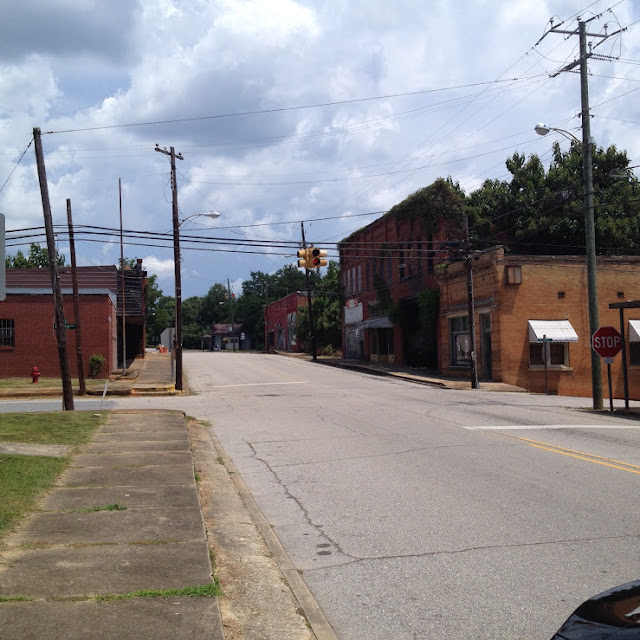 A view of downtown Camp Hill along North Main Street or County Highway 121. 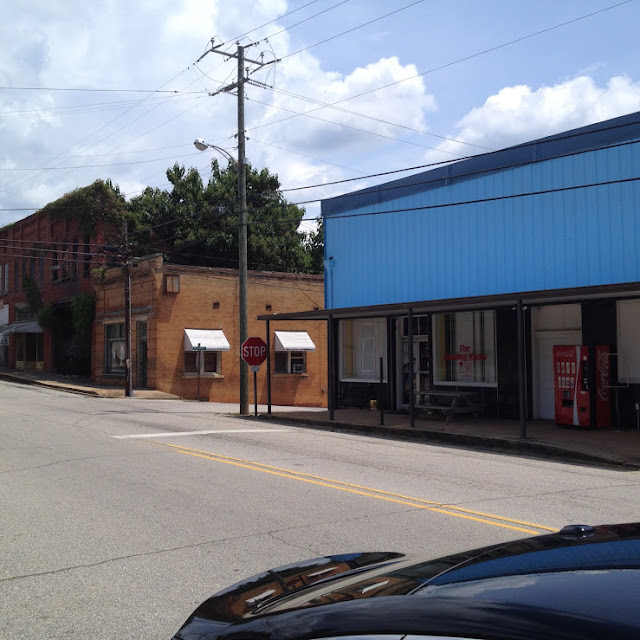 One of two active store fronts downtown, "The Reading Room" under the blue facade appeared to be a children's library/activity center. 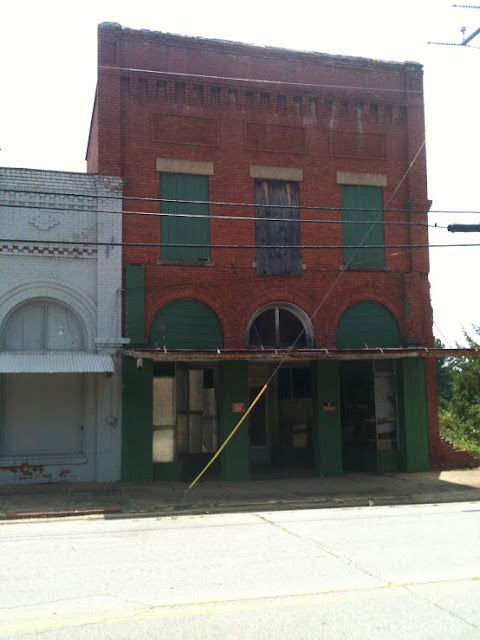 Visiting this hollow downtown late on a Sunday morning, we did run into a gentleman who said he was born in Camp Hill and had lived there all his life. He told us he remembered when Camp Hill was "a jumpin' place." My mother and her sister remember that too. Mom says the railroad brought many travelling salesmen through town who stayed in the hotel. Nearby Lake Martin may now be home to some former residents. 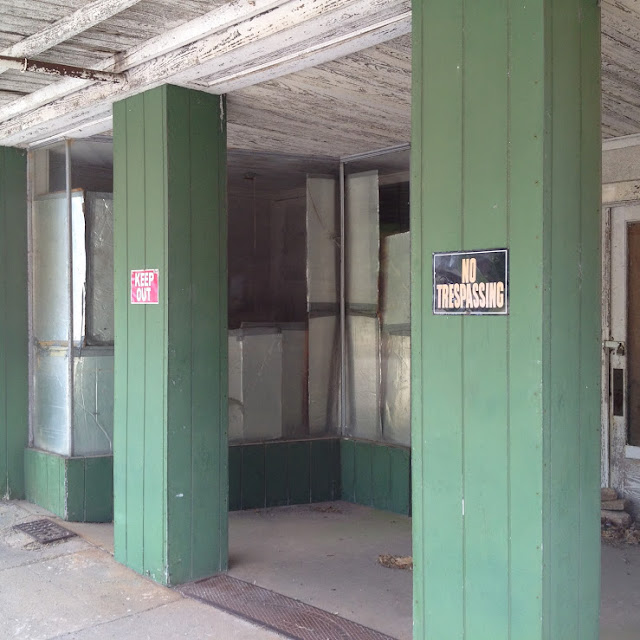 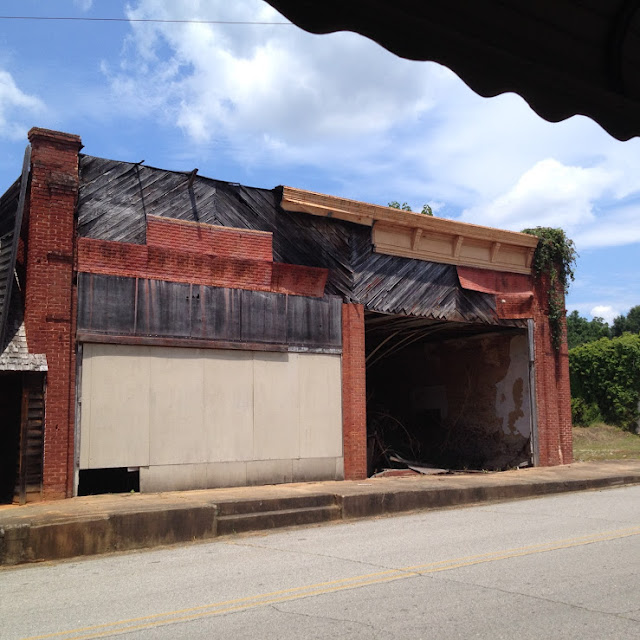 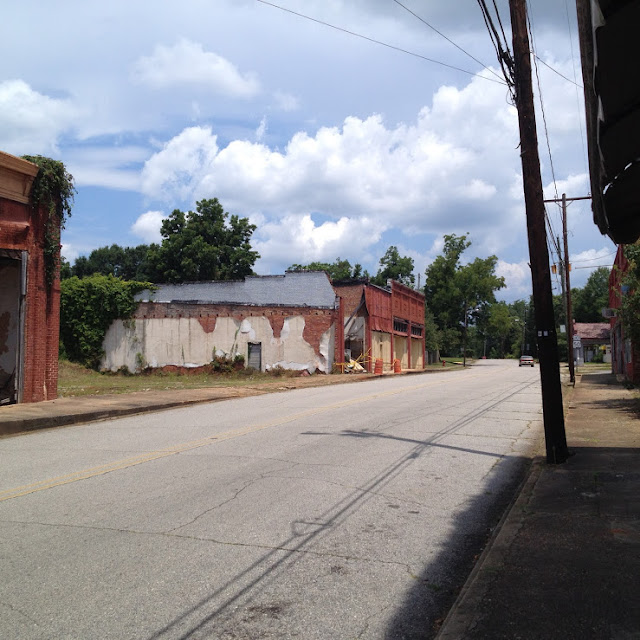 Opposite view of the downtown street 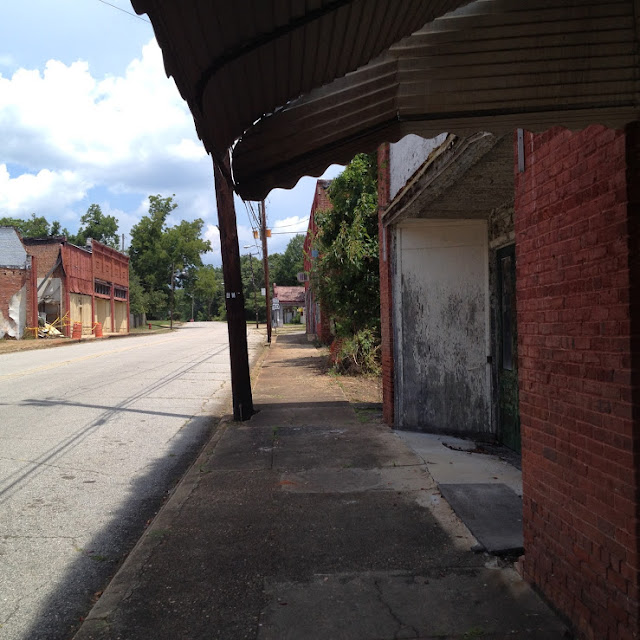 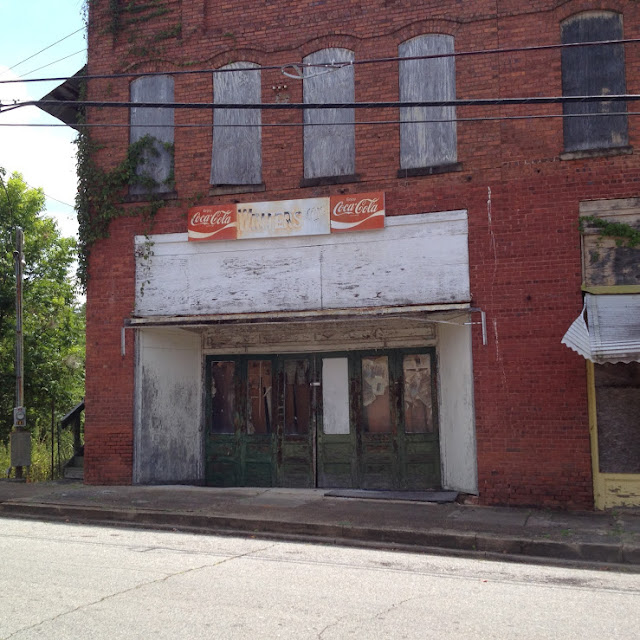 A sign of former life--the word "Winters" appears between the "Enjoy Coca-Cola" advertisements. Perhaps the site of a restaurant? 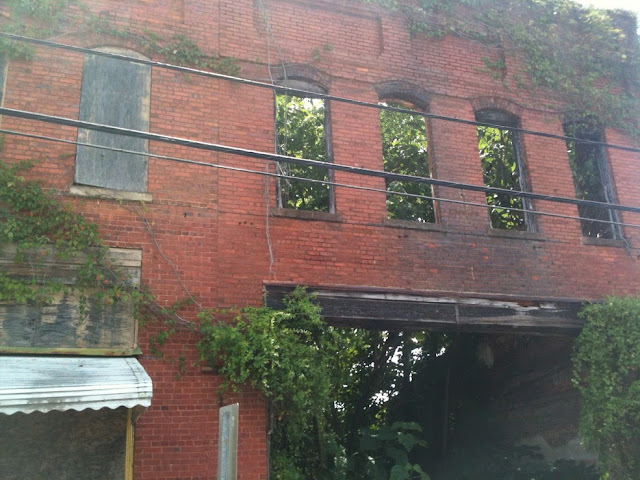 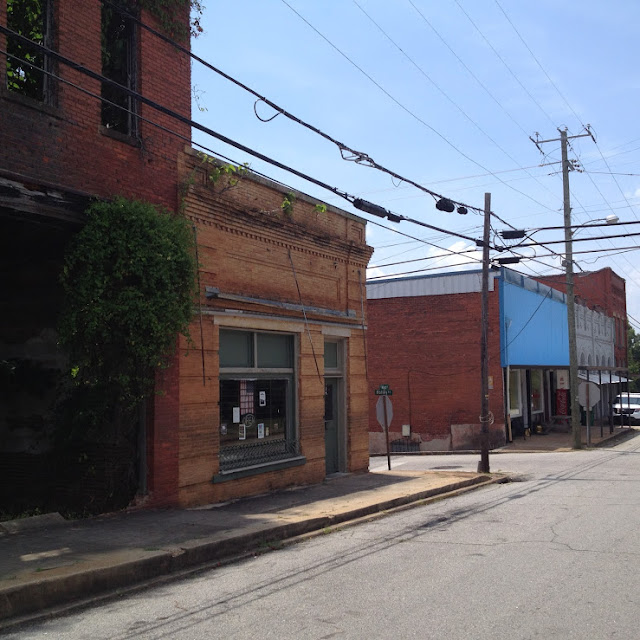 This corner building held the other active location, a consignment shop. The Reading Room is across the side street, under the blue front. 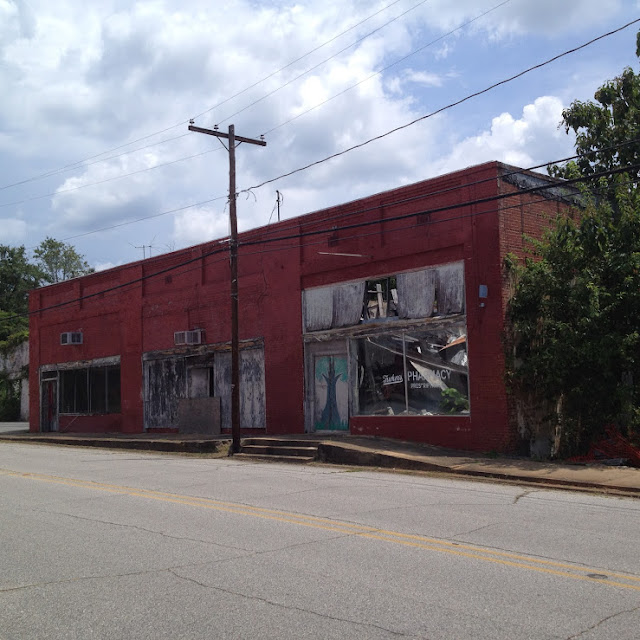 Tucker's Pharmacy once occupied this location.

More photos of downtown Camp Hill from 1998/9 can be found here. 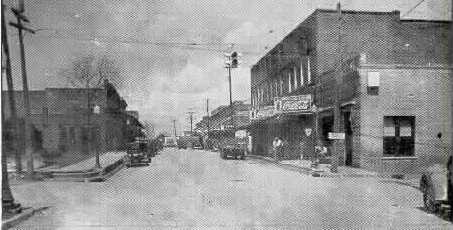 This photo shows Camp Hill's downtown in the 1930's. 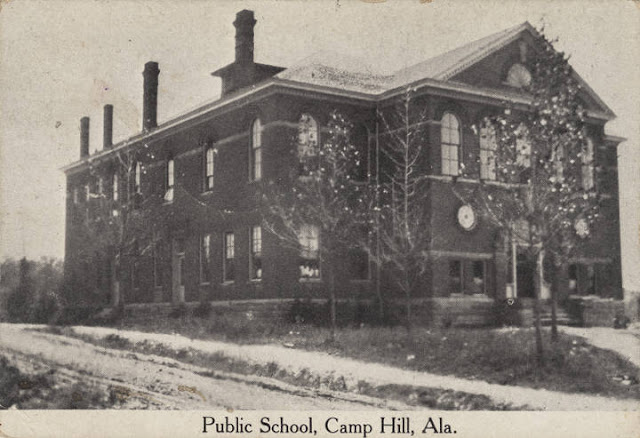 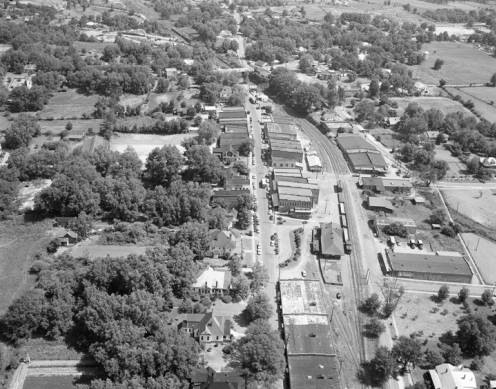 This aerial view of Camp Hill in June 1956 appears to have many cars parked along main street in the downtown area.

Posted by AlabamaYesterdays at 11:21 AM