"Flag that Train (to Alabam')"

I've done a couple of posts on this blog devoted to songs about Alabama from the 19th and early 20th centuries. You can read them here and here. I've also written one on songs about Birmingham. I'll be continuing this theme in some posts about individual songs and here's the first one.

This "shimmy fox trot" was recorded on either April 30 or May 1, 1925, in Camden, New Jersey. The Victor Talking Machine Company had it's recording and manufacturing operations there; the firm was purchased by RCA in 1925. What's a "shimmy fox trot", you ask? I presume it was a combination of a 1920's dance craze and the foxtrot.

Fred Hamm was a cornet player and singer who in 1925 took over the Benson Orchestra founded by Edgar Benson. With his three bandmates Dave Bennett, Chauncey Gray, and Bert Lown he wrote the popular "Bye Bye Blues." A list of some of the group's recordings can be found here. Recordings on YouTube are here.

A recording of "Flag that Train" is here. Lyrics are below. I've been unable so far to learn anything about the songwriters "Richmond; McPhall; Rothschild".

This song belongs to a couple of standard categories. The authors may never have been to Alabama or other southern states. The "Sunny South" was a fantasy trope used by many Tin Pan Alley-type writers to stand for a far-away paradise. The notion of catching the train back to see your loved one was also popular during the late 19th and early 20th centuries in America.

I guess part of the title was added in Spanish for such markets in the Western Hemisphere. 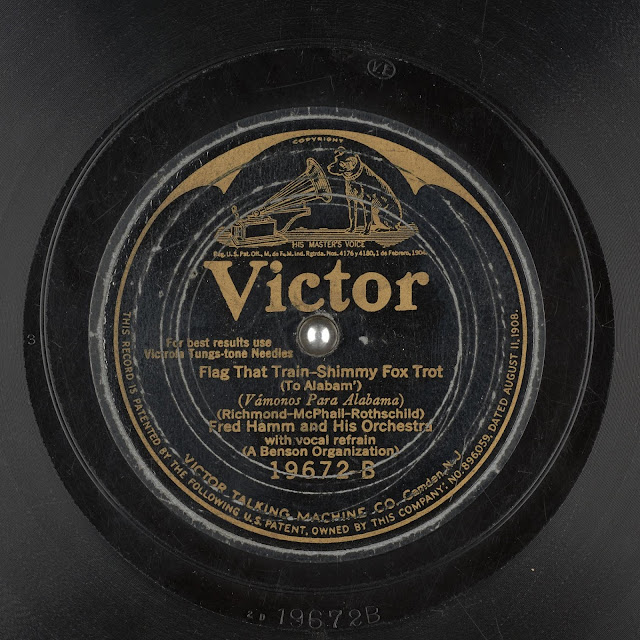 Source: Internet Archive, where you can also hear this recording

Posted by AlabamaYesterdays at 10:41 AM