The Alabama Writers' Conclave was founded in 1923 and is one of the oldest organizations for authors in the U.S. Today it's known as the Alabama Writers' Cooperative. The AWC chooses the state's Poet Laureate, a position created by the state legislature in 1931; the choice is certified by the governor. The current Laureate is Jennifer Horne. You can read about that program and see a list of all laureates here.

Before the AWC was even a decade old, the group published The Anthology of Alabama Poetry 1928. I have included the table of contents and the biographical notes below since this book is not widely available. WorldCat.org lists only 57 libraries having it in their collections; several of those are in Alabama. Bookfinder.com, which aggregates the inventories of hundreds of used and rare book dealers, turns up no copies for sale.

This anthology is something of a snapshot of the poetry landscape in Alabama at the time of publication. Included is "A Biographical Dictionary of Alabama Poets" that offers brief entries on most of the men and women included. There are some 80 poets in this collection; the majority are women. Note how many of these individuals were also members of other national, regional and local writers' groups, art guilds, etc.

I haven't reproduced any of the poems, but the titles will give you an idea of the sorts of things included. Lots of poems about the natural world and various emotions appear in these pages. Some are poems related to Alabama themes, such as Wallace M. Sloan's "Birmingham".  Many poems are pale, precious, sentimental things produced by writers untouched by the modernism gripping poetry and literature and the rest of the arts at the time. Some readers might add, "Untouched by talent, too" and so it goes.

As far as I know, this anthology was the first of only three ever published of Alabama poets that attempted state-wide coverage. The other two are Louise Crenshaw Ray's Alabama Poetry (1945) and Ralph Hammond's Alabama Poets: A Contemporary Anthology (1990).

On his massive web site "History of Birmingham Poetry" Craig Legg has much to say about the AWC and the contents of this anthology.

I have added a few other author achievements and information below the directory images that follow. 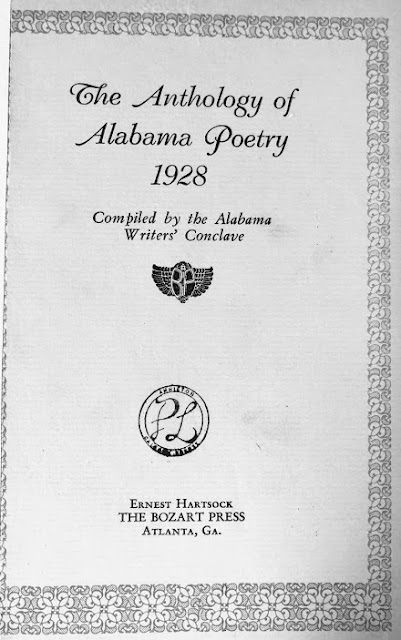 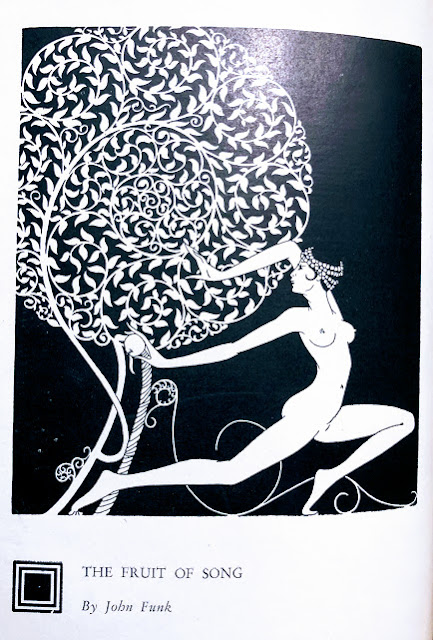 I have been unable to find any information about Funk, who created this Art Deco illustration. He is not included in the biographical directory. The work seems a bit racy for a 1928 publication related to Alabama poetry, but maybe  the easily offended didn't see it. 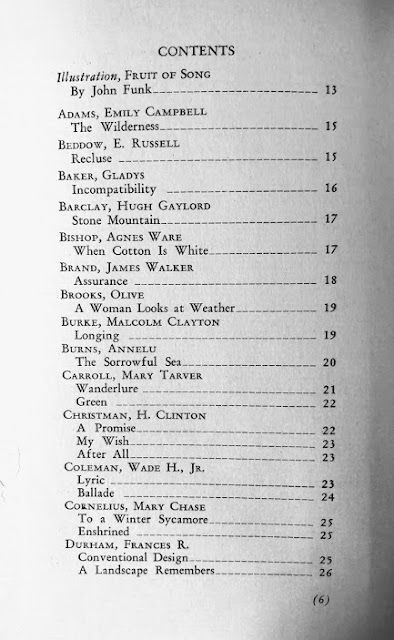 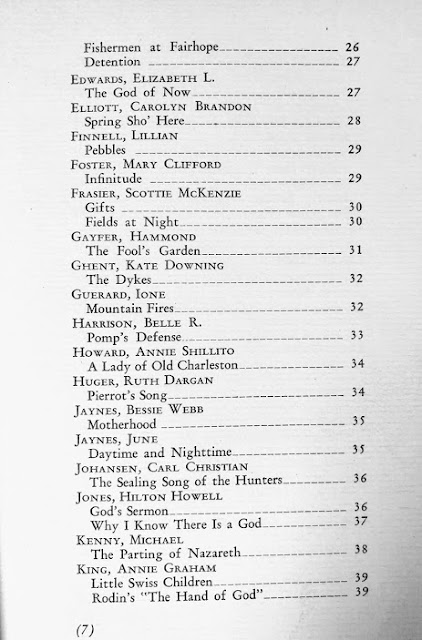 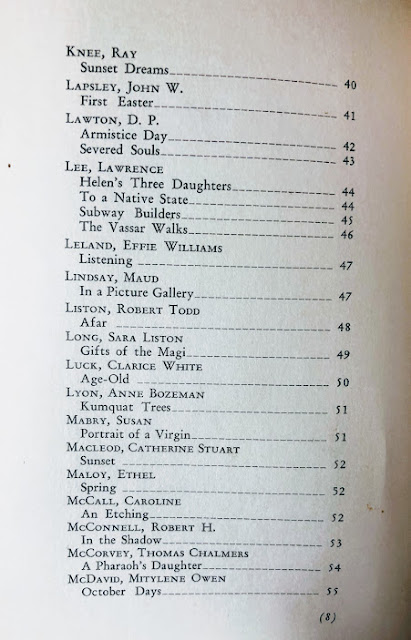 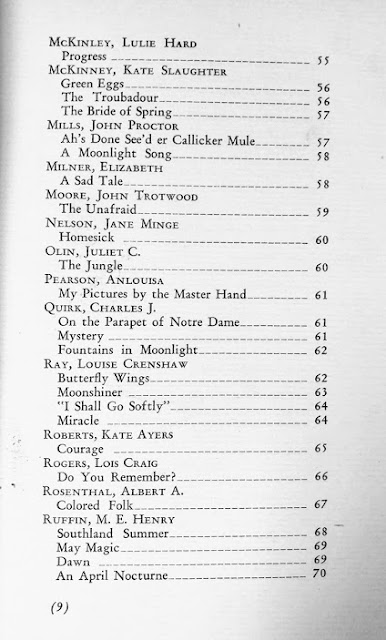 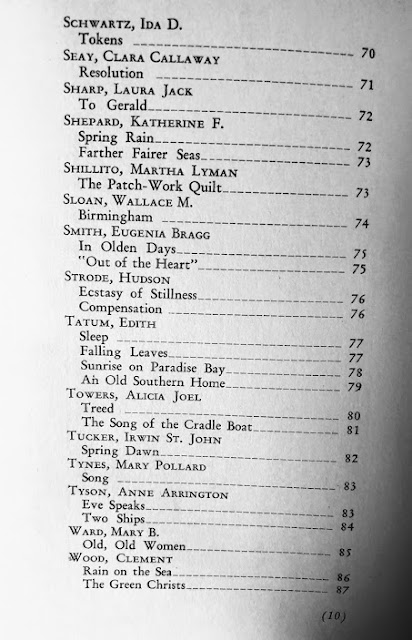 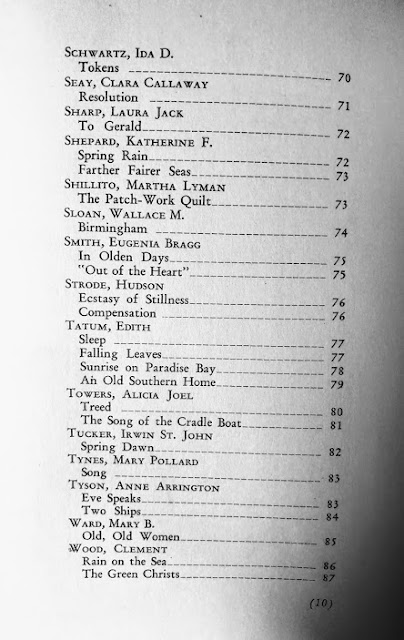 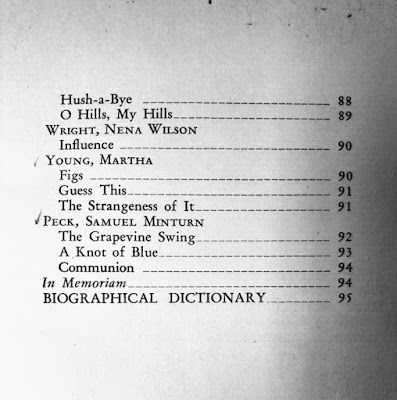 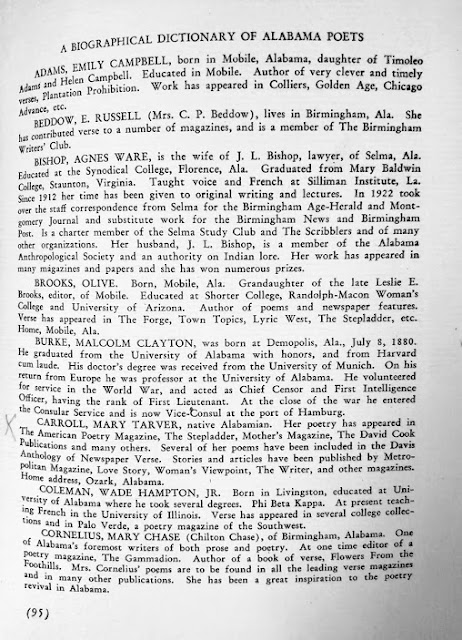 Emily Campbell Adams is described as the "Author of very clever and timely verses Plantation Prohibition", but I can find no information on a collection of that name.

The collection Flowers from the Foothills by Mary Chase Cornelius is a chapbook of 28 pages. 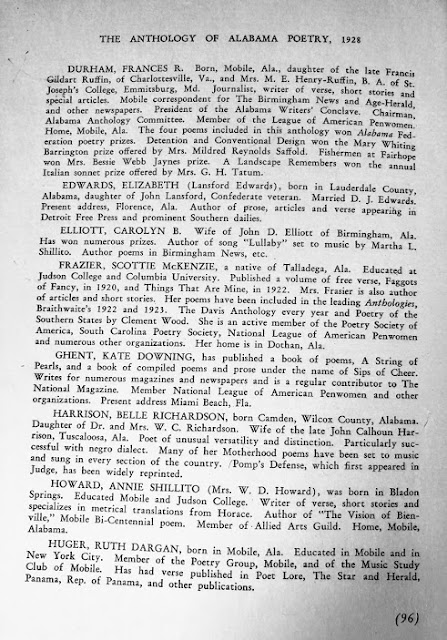 Francis R. Durham was President of the Conclave at the time of publication.

Scottie McKenzie Frasier's Fagots of Fancy is a 1920 collection of some 60 pages with an introduction by Alabama novelist and playwright Helen S. Woodruff. You can read the collection here. The title page notes the poems are "In Free Verse." In 1922 her second collection Things That Are Mine appeared; read it here.

Kate Downing Ghent's 42-page chapbook A String of Pearls and Other Poems was published in 1925. I could not find information on Sips of Cheer.

Unfortunately, I found no information about or copy of Annie Shillito Howard's "The Vision of Bienville", a poem written for Mobile's bi-centennial celebrated in 1902. Perhaps it was published in a local newspaper. 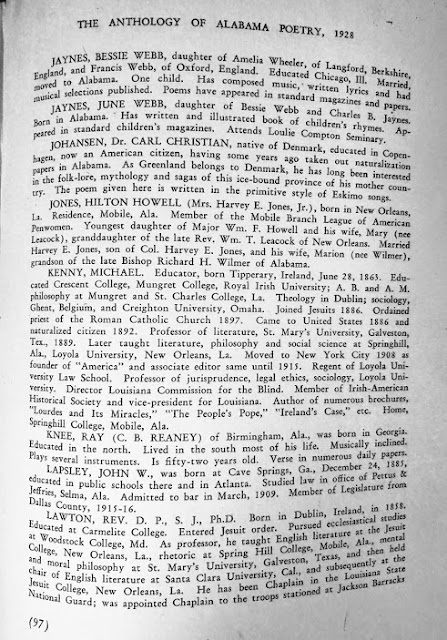 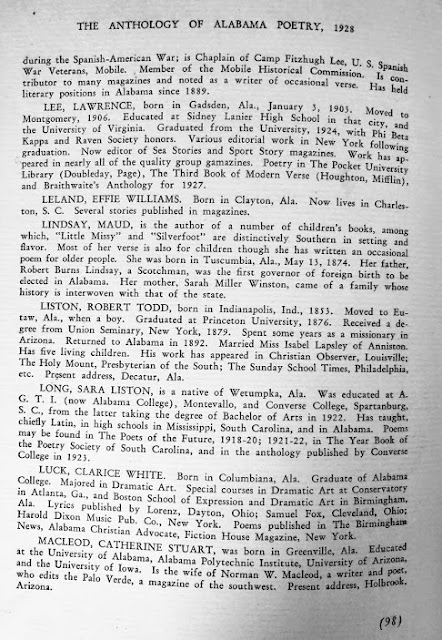 Lawrence Lee was born in Gadsden and graduated from Sidney Lanier High School in Montgomery. He attended the University of Virginia, graduating in 1924, then settled in New York for editorial work. This opportunity apparently led to his editorship of Sea Stories and Sport Story Magazine. Both publications were part of the Street and Smith empire, which published dime novels, pulp magazines and other materials between 1855 and 1959.

The FictionMagsIndex shows several poems Lee published in magazines in the 1920's and later. Lee may have returned to Virginia; he published two poetry collections in the 1930's with connections to that state. The first was Summer Goes On in 1933 and then Monticello and Other Poems in 1937. Both were issued by Scribner's, a major New York imprint; they publish Hemingway, for instance. 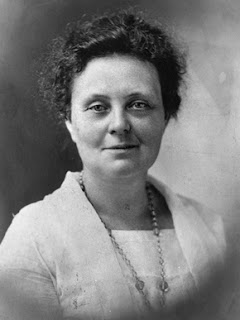 At the time of this anthology's publication, Maud Lindsay was one of its best known authors. A childhood friend of Helen Keller's, she founded in Florence the state's first free kindergarten in 1898. She wrote a number of books of stories and poems for children, much of it reflecting her own experiences. The Online Books Page has links to full texts of several of her books. 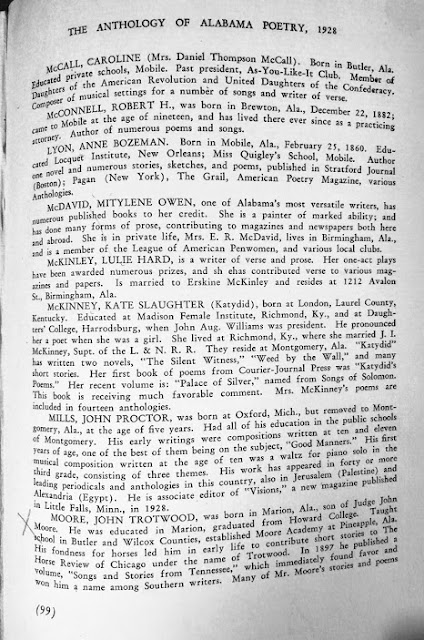 The directory describes Mitylene Owen McDavid as a painter and the author of "numerous" published books. The only one I could find was Culinary Crinkles: Tested Recipes issued by the Woman's Guild of Birmingham's Church of the Advent in 1919.

Kate Slaughter McKinney wrote at least two novels as well as poetry that appeared in her own collections and anthologies, much of it while living in her native Kentucky. She married a superintendent of the L&N railroad and was living in Montgomery at the time this anthology appeared.

John Trotwood Moore [1858-1929] was born in Marion, Alabama, but is more closely associated with Tennessee where he was state archivist and librarian for the last decade of his life. A Confederate veteran, Moore authored novels, short stories and poetry. He was a Lost Cause proponent; you can read his "A Ballad of Emma Sansom" here. 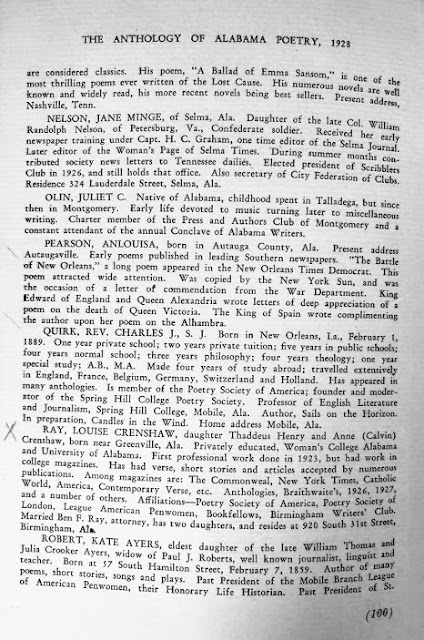 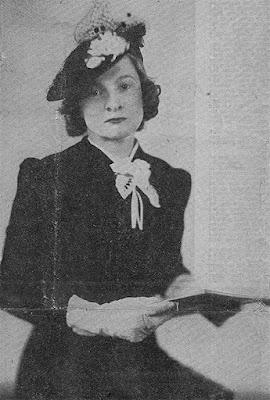 Louise Crenshaw Ray [1890-1956] continued to write poetry and published four collections often with poems featuring Alabama themes and settings. She also edited the 1945 collection Alabama Poetry featuring work by members of the Poetry Society of Alabama, founded in Birmingham in 1929. You can find an extensive discussion of her life and poetry at Craig Legg's History of Birmingham Poetry. 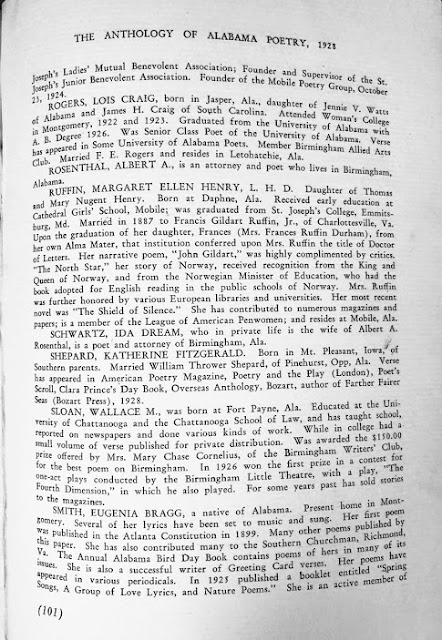 Eugenia Bragg Smith is buried in Oakwood Cemetery in Montgomery. Her poem "The Coquette" in the form of a villanelle about a butterfly can be found here.The bio note here observes, "She is also a successful writer of Greeting Card Verse". Such poetry is often unsigned and a literary production so ephemeral most of its practitioners are unknown. 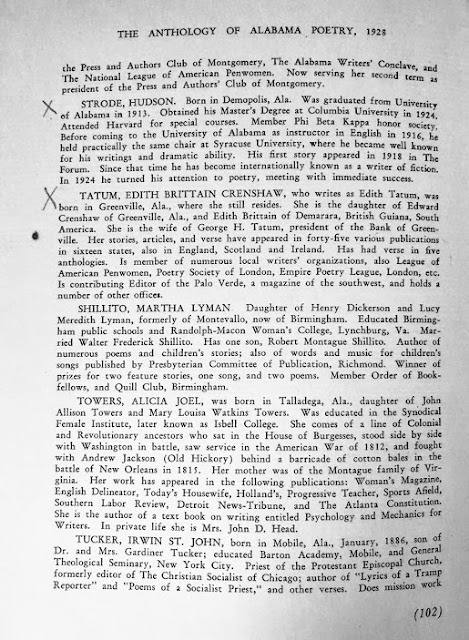 Hudson Strode [1892-1976] was a legendary English professor and creative writing teacher at the University of Alabama beginning in 1916. He published a wide range of novels, non-fiction, and poetry. Strode also taught many student who went on to become writers such as Helen Norris and Lonnie Coleman. 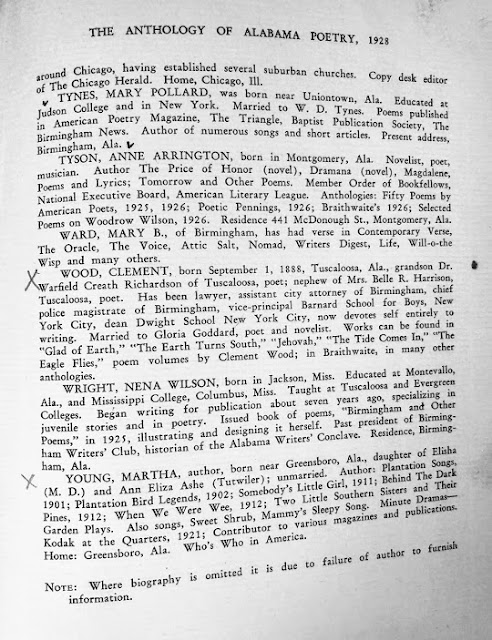 Clement R. Wood had a very prolific and very strange writing career that continued until his death in 1950. He graduated from law school at the University of Alabama, and by 1919 had published his first book. This one was followed by a steady stream of novels, poetry collections, biographical profiles, historical works and more. He also edited a number of books, including a popular rhyming and craft handbook for poets. Wood wrote or edited a number of the popular Little Blue Books, including the classic The Art of Kissing. You can read more about Wood here.

Nena Wilson Wright's Birmingham and Other Poems appeared in 1926. The title poem "Birmingham" can be read here along with other poems about the city.

Martha Young [1862-1941] was already well-known as a regional author by the time this anthology appeared. Between 1901 and 1921 she had published eight books of tales, fables, songs and stories based on her life as a girl growing up in Alabama. She was admired, at the time anyway, for her use of African-American dialect. You can read a typical title, When We Were Wee: Tales of the Ten Grandchildren published in 1912 here. 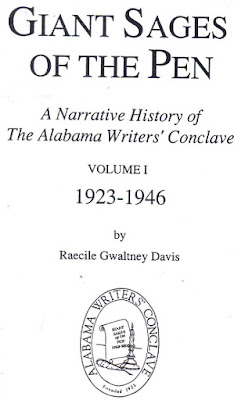 This history of the AWC's early years was published in 1993. 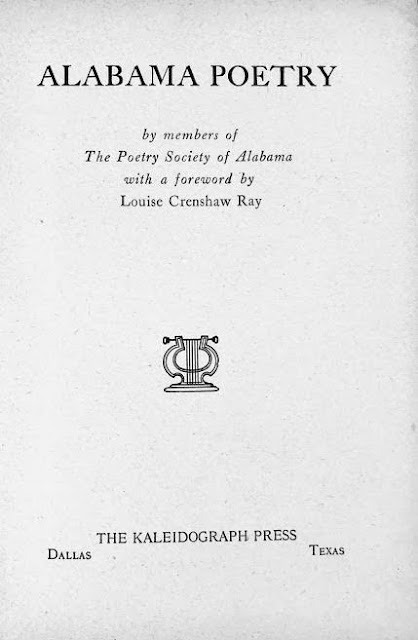 The Poetry Society of Alabama was founded on February 7, 1929, in Birmingham. I don't know how long it lasted, but it must have been in pretty good shape when this anthology was published in 1945. The Alabama State Poetry Society was founded in 1968, so I presume the earlier organization disappeared before then. 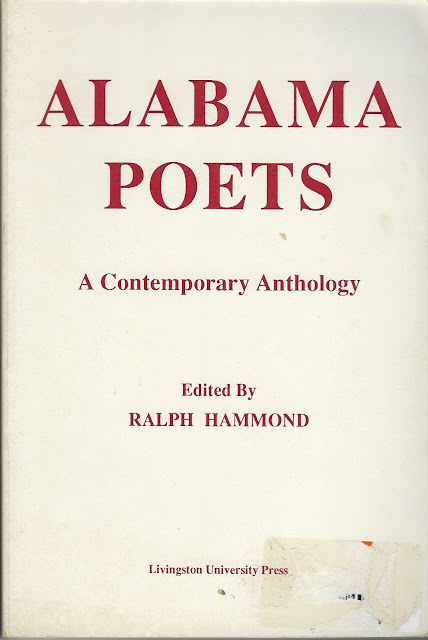 Posted by AlabamaYesterdays at 7:11 AM