Langston Hughes [1901-1967] was an American writer born in Joplin, Missouri. During his career he wrote novels, poetry, plays and non-fiction works including articles and columns for magazines and newspapers. He was an important figure in the Harlem Renaissance and a civil rights activist. Hughes' bibliography of published works is extensive.

Among his many poems are several related in some way to Alabama. As might be expected, they address racial turmoil in the state. The earliest one is "Christ in Alabama", published in the Contempo magazine issue of December 1, 1931. In March of that year two white women accused nine young black men of rape; all had been riding in a train that stopped near Paint Rock in Jackson County. The blacks, dubbed the Scottsboro Boys, were quickly arrested and tried in early April before several all-white juries. The guilty verdicts were appealed and retried for years in the courts despite one of the victims recanting and other exonerating evidence. The case became infamous around the world.

That first poem Hughes wrote about the case can be read below; it imitates the call and response of so much African-American music and its sources in sub-Saharan Africa. "Christ in Alabama" is a brief, blistering cry against this particular injustice and so many others. In the wake of the Scottsboro case 5000 copies of that Contempo issue were printed. A revised version of the poem appeared in 1967. Several commentaries can be found here. Jon Woodson places the poem in context in his essay "Anti-Lynching Poems in the 1930s."

In 1932 Hughes published a twenty page pamphlet titled Scottsboro Limited that included "Christ in Alabama" and three more poems, a verse play and striking illustrations by Prentiss Taylor. You can read some of the poems here; "The Town of Scottsboro" is brief but especially touching.

In that same year Hughes undertook a poetry reading tour of seventeen states that included some in the South. The tour began about the time the Contempo issue appeared. According to Woodson's essay linked above, Hughes read his poetry to the Scottsboro Boys in Kilby Prison.

"For Selma" was included in the collection Ebony Rhythm: An Anthology of Contemporary Negro Verse edited by Beatrice M. Murphy and published in 1947. I'm not sure why he used Selma rather than some other small town, since the voting rights marches did not begin there until 1965. Perhaps he became aware of Selma when he was in the state in 1931. Although he lived in many locations around the country, Hughes did spend 1947 teaching at Atlanta University.

"Birmingham Sunday" is much easier to place, since it explicitly deals with the 16th Street Baptist Church bombing on Sunday, September 15, 1963. That event inspired another African-American poet; see Dudley Randall's "Ballad of Birmingham"

"Alabama Earth" and "Daybreak in Alabama" are different in offering Hughes' hopes that race relations might one day improve "When I get to be a colored composer", even in a place like Alabama. "Alabama Earth" is set "At Booker Washington's grave" which is located on the Tuskegee University campus. 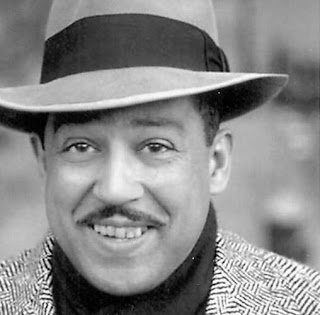 Source: Project on the History of Black Writing

When I get to be a colored composer
I'm gonna write me some music about
Daybreak in Alabama
And I'm gonna put the purtiest songs in it
Rising out of the ground like a swamp mist
And falling out of heaven like soft dew
I'm gonna put some tall tall trees in it
And the scent of pine needles
And the smell of red clay after rain
And long red necks
And poppy colored faces
And big brown arms
And the field daisy eyes
Of black and white black white black people
And I'm gonna put white hands
And black hands and brown and yellow hands
And red clay earth hands in it
Touching everybody with kind fingers
Touching each other natural as dew
In that dawn of music when I
Get to be a colored composer
And write about daybreak
In Alabama.

(At Booker Washington’s grave)Deep in Alabama earthHis buried body lies-But higher than the singing pinesAnd taller than the skiesAnd out of Alabama earthTo all the world there goesThe truth a simple heart has heldAnd the strength a strong hand knows,While over Alabama earthThese words are gently spoken:Serve-and hate will die unborn.Love-and chains are broken.To flung my arms wideIn some place of the sun,To whirl and to danceTill the white day is done.Then rest at cool eveningBeneath a tall treeWhile night comes on gently,   Dark like me-That is my dream!To fling my arms wideIn the face of the sun,Dance! Whirl! Whirl!Till the quick day is done.Rest at pale evening…A tall, slim tree…Night coming tenderly   Black like me.

(September 15, 1963)
Four little girls
Who went to Sunday School that day
And never came back home at all--
But left instead
Their blood upon the wall
With spattered flesh
And bloodied Sunday dresses
Scorched by dynamite that
China made aeons ago
Did not know what China made
Before China was ever Red at all
Would ever redden with their blood
This Birmingham-on-Sunday wall.
Four tiny little girls
Who left their blood upon that wall,
In little graves today await:
The dynamite that might ignite
The ancient fuse of Dragon Kings
Whose tomorrow sings a hymn
The missionaries never taught
In Christian Sunday School
To implement the Golden Rule.
Four little girls
Might be awakened someday soon
By songs upon the breeze
As yet unfelt among
Magnolia trees. 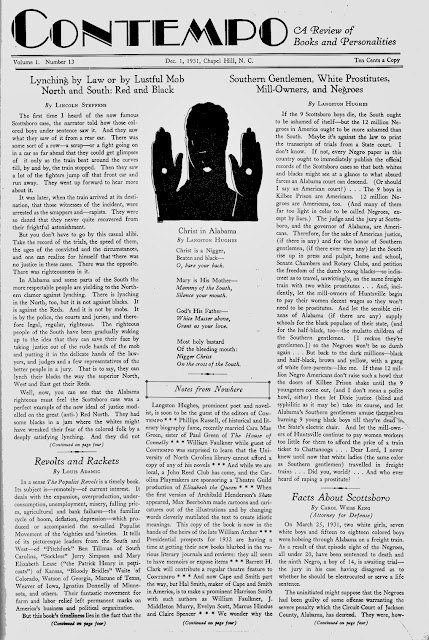 This Decembr 1, 1931, Contempo issue published not only Hughes poem but his essay about the Scottsboro boys case. 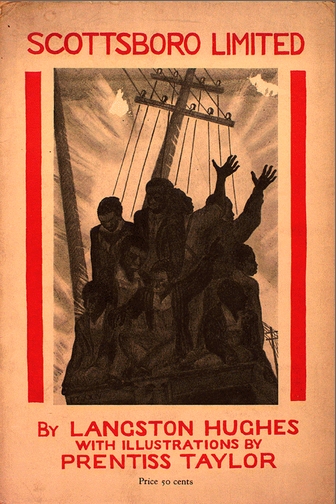 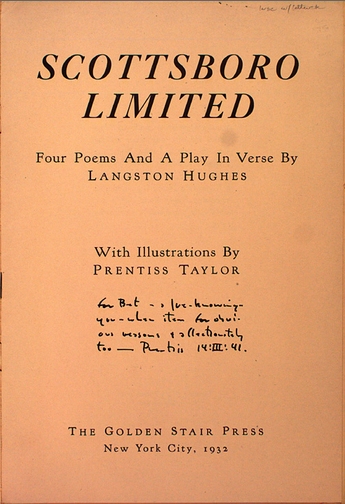 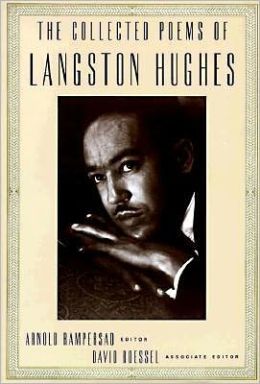 Posted by AlabamaYesterdays at 11:08 AM 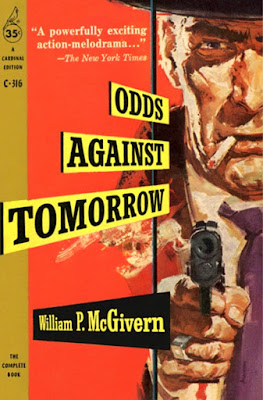