Since April is National Poetry Month, I'm posting a few items on this blog about Alabama poets and such. In this one let's take a trip through a 1945 collection of poems by 37 members of the Poetry Society of Alabama and the career of its editor, Louise Crenshaw Ray.

Louise Crenshaw was born in Butler County on May 17, 1890, one of seven children. Her father was Thaddeus Crenshaw, who served three terms in the Alabama legislature. An ancestor, Andrew Crenshaw, served on the state supreme court and is the namesake of Crenshaw County.

Louise attended what is now Huntingdon College in Montgomery and also received a B.A. from the University of Alabama. She married lawyer Benjamin Ray on January 23, 1918. They had two daughters, Anna and Mary.

Ray published four collections of poetry during her lifetime. Color of Steel appeared in 1932, followed by Secret Shoes (1939), Strangers on the Stairs (1944) and Autumn Token (1957). Her poems were also included in various magazines and anthologies. In the early years she wrote about such topics as Alabama history and the natural beauty of the state. Later in life subjects like love, loss, and racial issues appeared.


In 1933 the talented and dedicated Louise Crenshaw Ray was named Society president, the latest in a line of talented and dedicated literary club women to lead the organization. All Poetry Society officers were poets themselves, likewise gifted with organizational skills and leadership qualities. Along with Ray, the most active were Mary Pollard Tynes, Anne Southern Tardy and Martha Lyman Shillito. All published widely in the newspapers and magazines of the day, and served as officers in a number of clubs, including The Poetry Society, Birmingham Writer’s Club, The Quill Club and the Birmingham branch of the National League of American  Pen Women.
In my own humble opinion, in the actual writing of poetry, Louise Crenshaw Ray stood head and shoulders above her peers. Born to a proud Old South family in the Alabama Black Belt, she moved to Birmingham as a young woman, taught school, and married lawyer Ben Ray. In 1932 she published her first volume of collected poems, titled Color of Steel, a fully realized, mature book of poetry and perhaps the best that I have yet come across by a Birmingham-related poet. It got mostly good reviews- and perhaps more important- received a flood of publicity, generating many newspaper articles about both book and poet. At the age of forty-two, Mrs. Ray was well past the age of ‘starlet,’ but, like James Saxon Childers at Birmingham-Southern, more often than not she seemed to command center-stage on the active Poetry Society ‘scene.’

Then he proceeds to an in depth discussion of the poems in Ray's book Color of Steel.

Below is more information about Ray and some of the other poets in this collection. Many of these individuals were also active in the Alabama Writers' Conclave [now Cooperative] and various local writers groups. The Poetry Society of Alabama was founded in Birmingham on February 7, 1929, and apparently disappeared at some point after publication of this anthology. Ray served as President in 1933. The Alabama State Poetry Society was founded in 1968.

Some of these poets, such as Ray, were included in the Anthology of Alabama Poetry which the Conclave had published in 1928. I expect to post an item about that book this month. 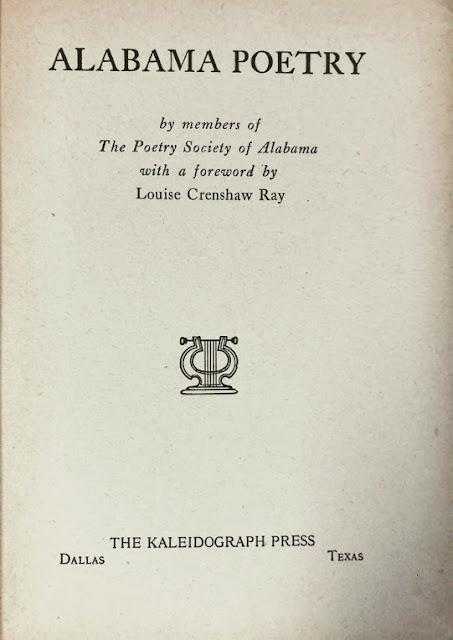 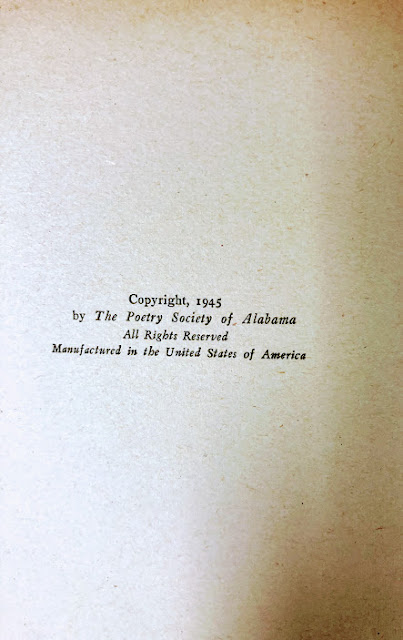 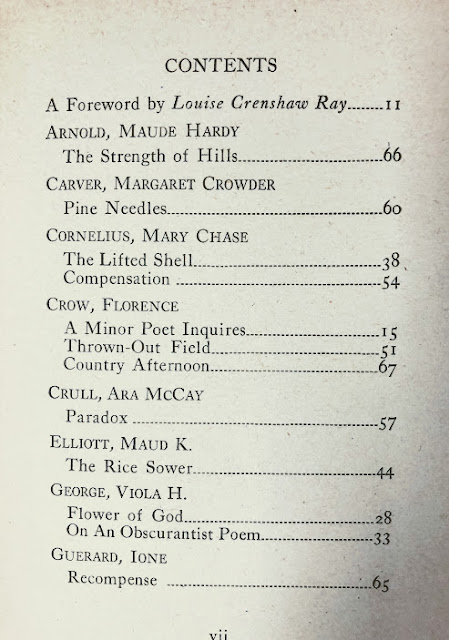 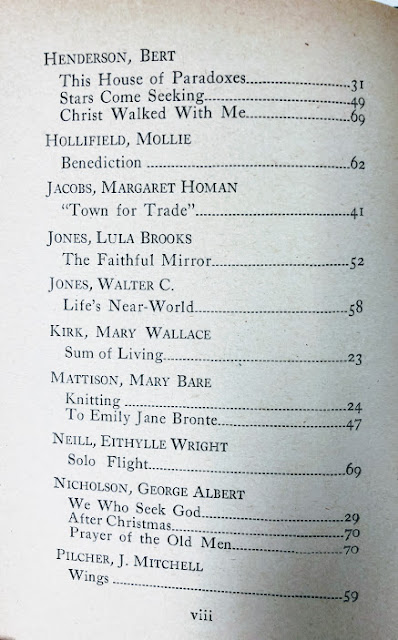 Bert Henderson was the third poet laureate of Alabama,  serving from 1959 until 1971. 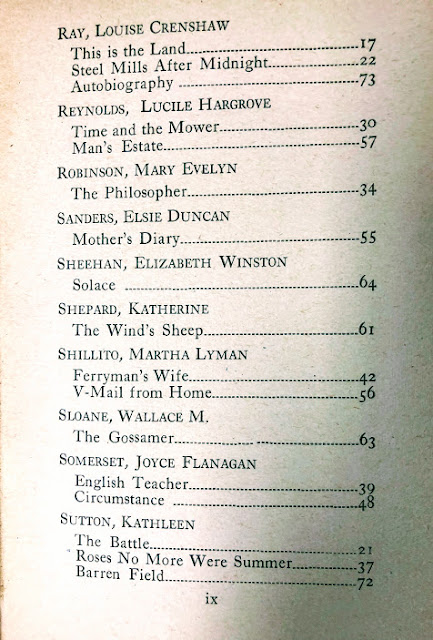 Martha Lyman Shillito was the seventh President of the Alabama Writers' Conclave [now Cooperative], serving in 1929-1930. 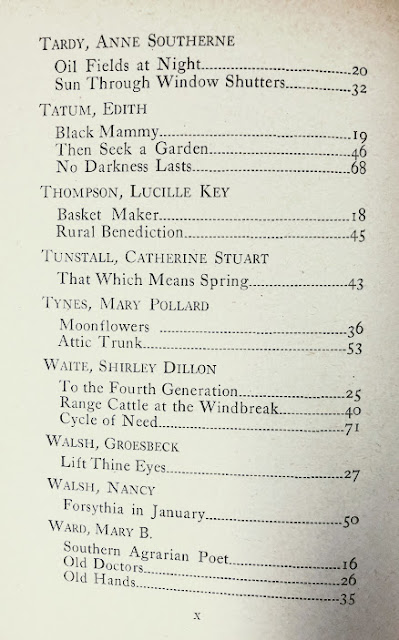 Mary B. Ward was Alabama Poet Laureate 1954-1958 just prior to Henderson. She was an original member of the Alabama Writers' Conclave [now Cooperative] and helped organize the 50th anniversary celebration in 1973. She was a feature writer for the Birmingham News and published poems in such places as The Saturday Evening Post, Saturday Review of Literature, Sewanee Quarterly, The New York Times, and The Washington Star. 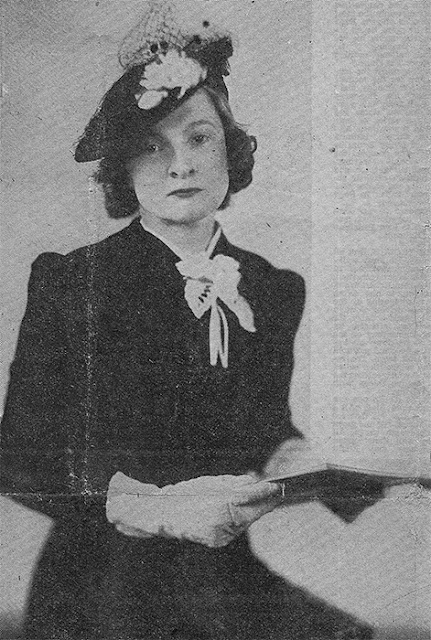 Craig Legg's "History of Birmingham Poetry" Chapter 4, the 1930's blog post  has an extensive discussion of Ray's life and her collection Color of Steel published by the University of North Carolina Press in 1932. 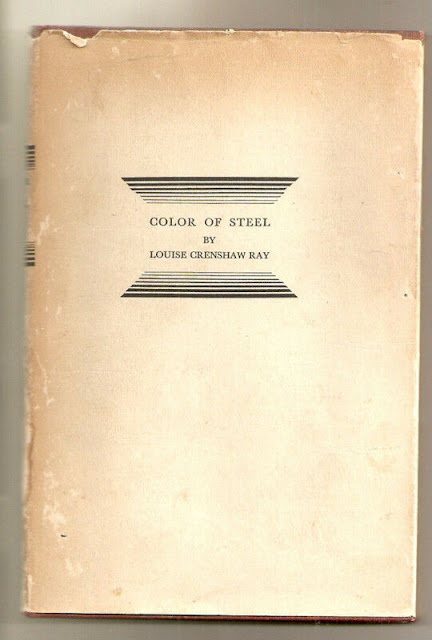 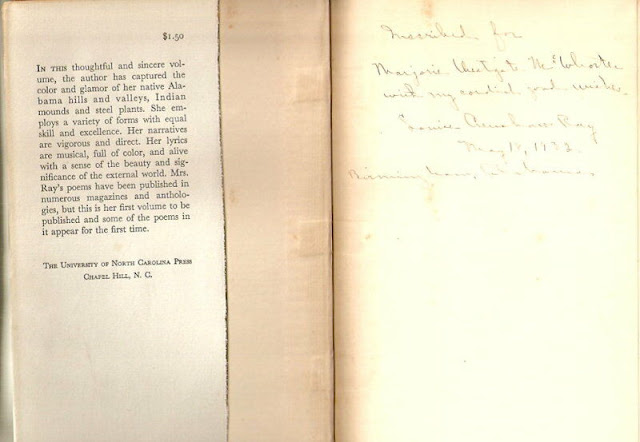 The three poems below are taken from the 1945 anthology Ray edited and include the name of the journals that originally published them. 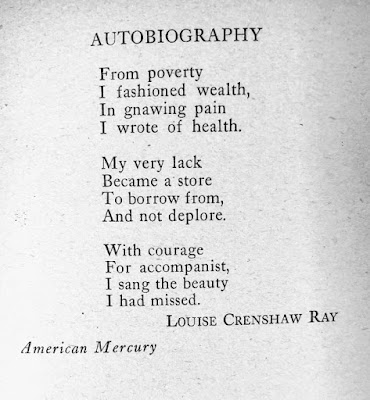 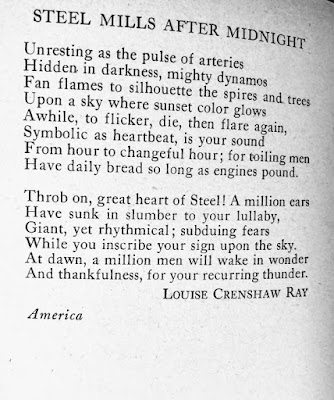 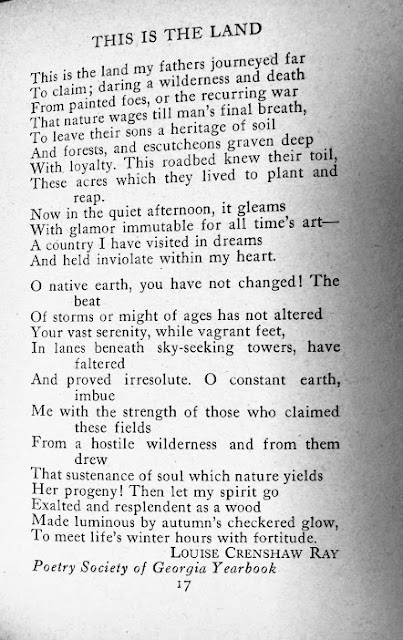 Posted by AlabamaYesterdays at 9:28 AM