Over the years several medical journals have been published in the state. One of those was the Alabama Medical and Surgical Age which in May 1900, in the midst of volume 12, changed its name to the Alabama Medical Journal. Under that title it lasted until June 1911. The change in name signaled the arrival of a new owner and editor, Dr. W.H. Bell.  In his book A History of Medicine in Alabama published in 1982 Howard L. Holley devotes a chapter to the history of Alabama's medical journals.

I recently came across volume 19, which begins in December 1906, on Google Books and will be exploring its contents in this and future posts. This copy of the journal volume digitized by Google has a bookplate noting "Boston Medical Library 8 The Fenway." In 1901 the BML had moved into its new location at that address. Their collections are now part of the Countway Library at Harvard Medical School.

Let's begin with the very first page of the volume. We see a masthead of the journal, telling us it's published in Birmingham, Alabama, with an office on North 20th Street. But before that information we are greeted by an advertisement for Phillips' Phospho-Muriate of Quinine. This product was manufactured by the Charles H. Phillips' Chemical Company, founded in 1819. Phillips invented his milk of magnesia formula in 1873. The company continued after his 1882 death under the leadership of his four sons. Sterling Products bought the company in 1923 and sold it in 1995 to Bayer HealthCare which maintains the brand today.

In its October 19, 1918, issue the Journal of the American Medical Association condemned this patent medicine's claims to treat physical and nervous exhaustion as "sheer nonsense". Phospho-Muriate of Quinine was a "complex and irrational mixture." But the fees the company paid medical journals to advertise the product no doubt helped the publications stay in business. 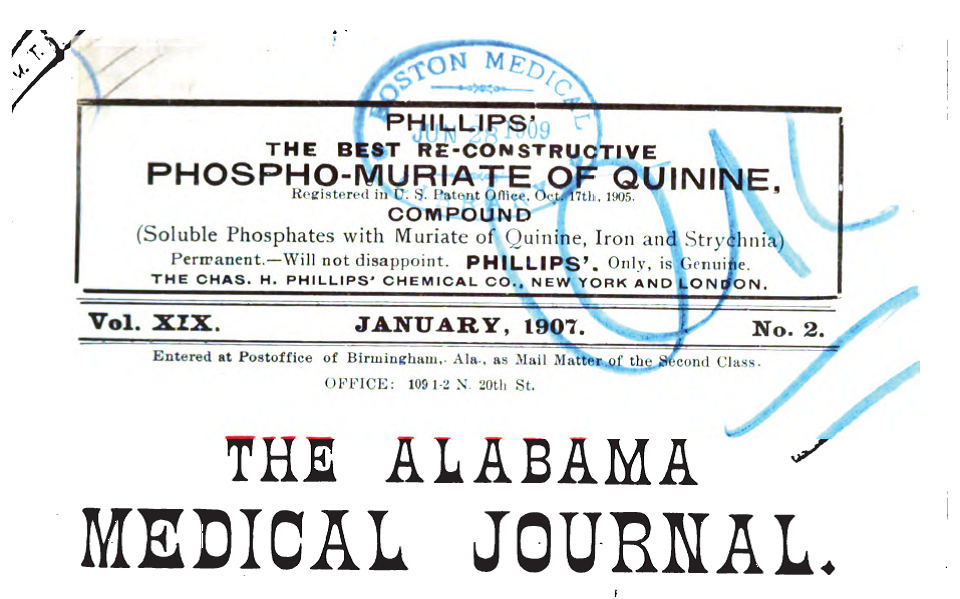 The next page of this journal contains two more advertisements from E. Fougera & Co., also of New York City. In 1849 Edmond Fougera opened a pharmacy in Brooklyn and from that start grew the company that still exists today. Salicylates originated from the bark of the willow tree and the pain relieving property has been known since ancient times. Aspirin is one modern product. Thus sufferers from gout and related conditions who took either of these two exotic-sounding preparations probably benefited from their use. 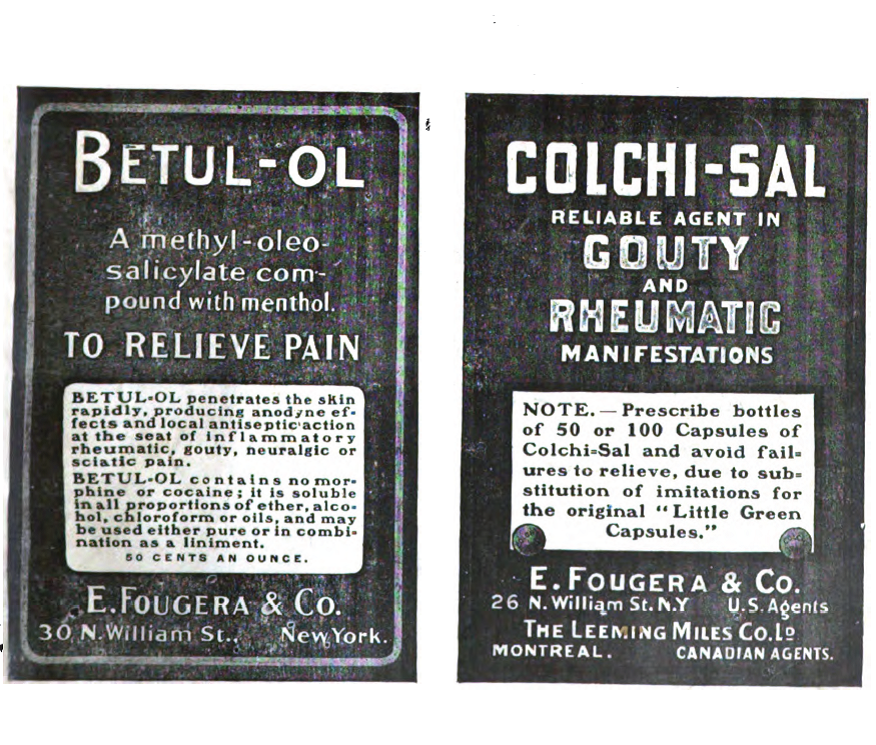 Here we are on the third page and confronted with yet another advertisement. [Don't worry--modern day medical journals often look like this as well!] What's up this time? Oh, Angier's' Petroleum Emulsion. Sounds like something that might be available after the BP oil spill. A photo of a bottle of the stuff from Antique-Bottles.net can be seen below the ad. 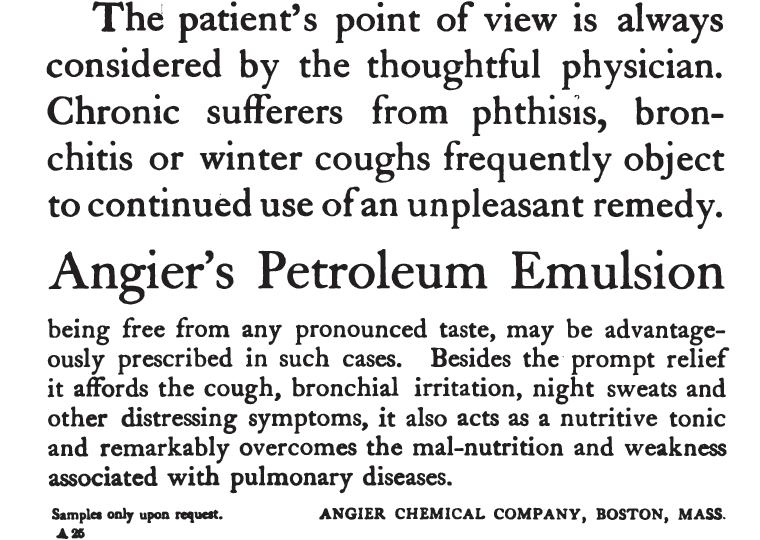 This cough medicine made from petroleum and hypophosphates went on the market around 1892. In its issue for September 12, 1914, the Journal of the American Medical Association noted that the company had been advertising this product as a "food-medicine" and an "ideal substitute for cod-liver oil." The journal noted that petroleum has no food value and gives a detailed analysis of the product's ingredients but seems not to condemn it too strongly. 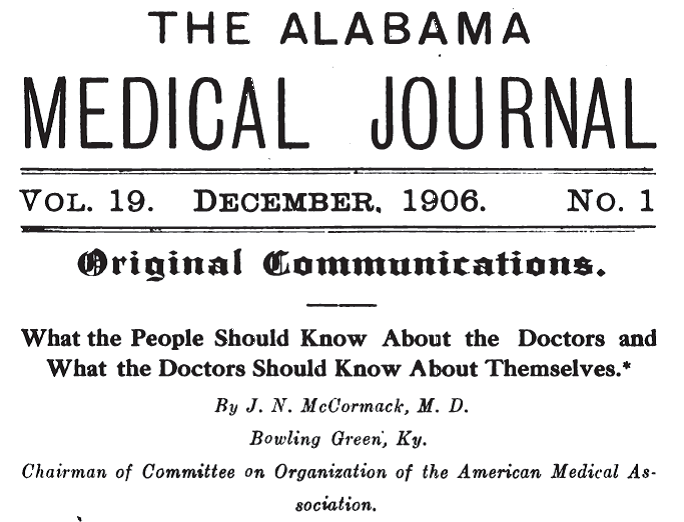 Finally! We get to the first article in the first issue of this volume. The representative of a no-doubt important committee of the American Medical Association takes pages 1-23 of the issue to explain what people and doctors should know about each other. I wonder if anyone picked up on the irony of such a piece after the bombardment of patent medicine ads. Perhaps one day I'll explore this particular article in detail to see just what was going on in this time period according to this doctor. His piece was published in an Alabama medical journal because it was "an address delivered" to the Jefferson County Medical Society in Birmingham in December, 1906. I hope they ate dinner after the talk.

At random points in the future I'll be coming back to this volume of the Alabama Medical Journal to explore its contents in greater detail. They provide an interesting snapshot of American and Alabama medical practice just after 1900. After all, this volume alone has exciting articles like "The Ethical Physician," "Intubation," "Stovaine Spinal Anaesthesia" and one that's bound to be fascinating, "Degeneracy" by William D. Partlow, Assistant Physician, Bryce Insane Hospital.

Posted by AlabamaYesterdays at 11:25 AM