Recently my brother Richard and I took one of our annual trips together seeking Alabama and family history. Last year's July trip took us to several places that I've written about: Aberfoil, Brundidge, Camp Hill, Tallassee and Union Springs. Once I scan some photos I have earlier years to discuss as well.

We've decided we're probably going to stop taking these trips in July. We're thinking more along the lines of January or February next time.

As is usually the case, we started our trip this year on Friday with the Alabama Numismatic Society's annual show at the Bessemer Civic Center. Richard is the coin and currency collector in the family, an interest he picked up from dad. I've always been curious about coins and currency, though, and learn a few things each time we go.

I have fond memories of dad's collecting in the days before he became interested in archaeology. He would often come home from work on Fridays with large bags of coins he'd gotten at the bank, and the three of us would go through them looking for goodies.

The show also has dealers selling other items, and I've picked up old maps of Birmingham and Alabama there in the past. This year I spent some time going through numerous old Alabama postcards.

We left the coin show around 4 pm and headed on surface roads through Bessemer, Midfield, and Birmingham toward Jasper. We were looking for Green Top Bar-B-Q in Dora, where Richard remembered eating back in the 1970's. We had wonderful bar-b-q plates there; we always manage to enjoy such places on our trips. The restaurant has some history of its own, having opened when "Truman was President" as their web site proclaims.

Then we left for Oak Hill Cemetery in Jasper. My comments about that portion of the trip are below. The city of Jasper is not named after the semi-precious gemstone, by the way, but after a Revolutionary War hero from South Carolina named William Jasper.

In the weeks to come I'll be posting more on places we visited on this trip. 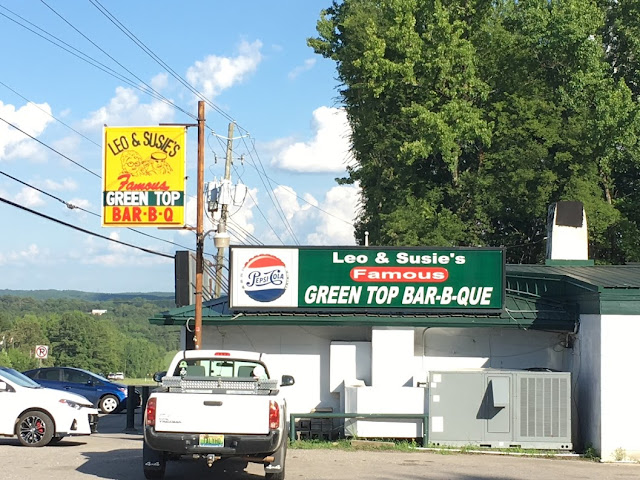 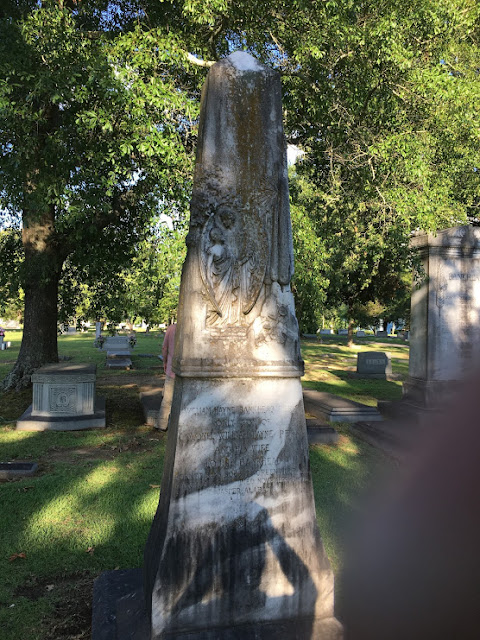 We have some ancestors buried in the cemetery, but we found a few other interesting markers first. Near the cemetery entrance is the gravestone above that marks the final resting place of William Haynes Bankhead Perry. Born in South Carolina, he died in Jasper in November 1915. His wife was Louise Bankhead; as we'll see Perry married into a prominent family in Jasper and Alabama.

His stone was carved by Giuseppe Moretti, the Italian sculpture responsible for promoting Sylacauga marble in many works and the iron Vulcan on Red Mountain. Moretti created only 14 cemetery memorials. 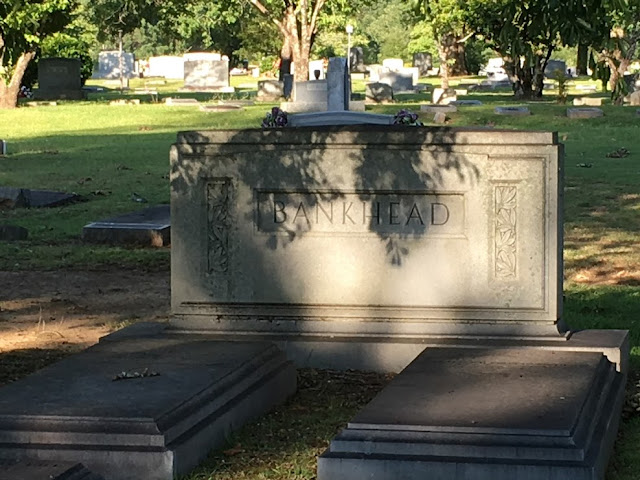 The graves above and below mark various members of the Bankhead family, prominent in Jasper, Alabama, and beyond. A number of them are buried in Oak Hill.

Below is the impressive stone for John Hollis Bankhead and his wife Tallulah. A Civil War veteran, Bankhead was variously a farmer, warden of the state penitentiary at Wetumpka, businessman, and a U.S. Representative for 20 years. His son John became a U.S. Senator, son William Speaker of the U.S. House, and daughter Marie director of the state archives for many years. Granddaughter and actress Tallulah was named after his wife. 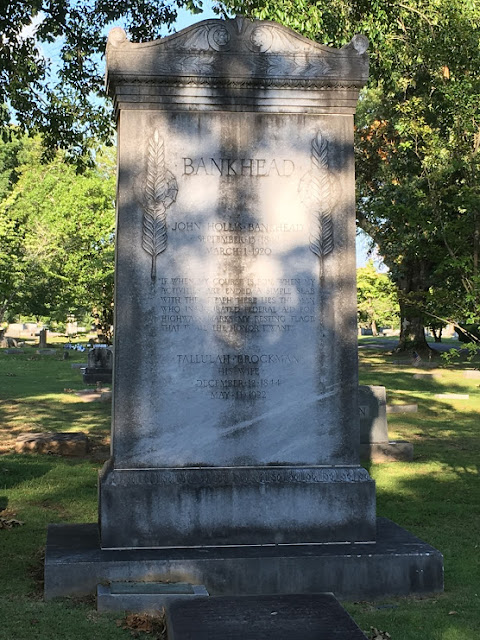 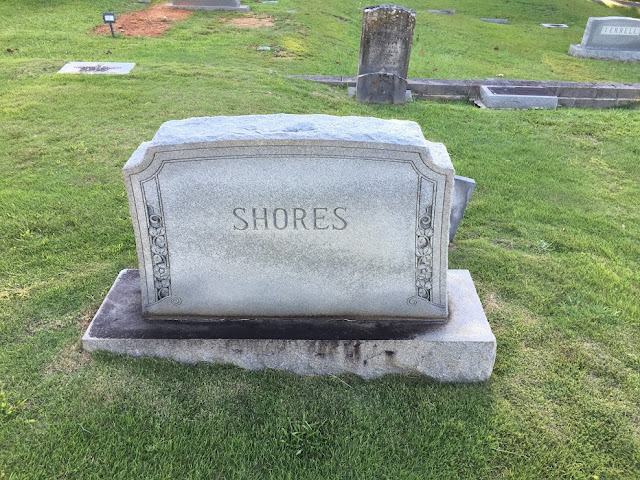 Some of our Shores and Samford ancestors can be found in a more modest section of the cemetery. The other side of this stone reads "Samford". 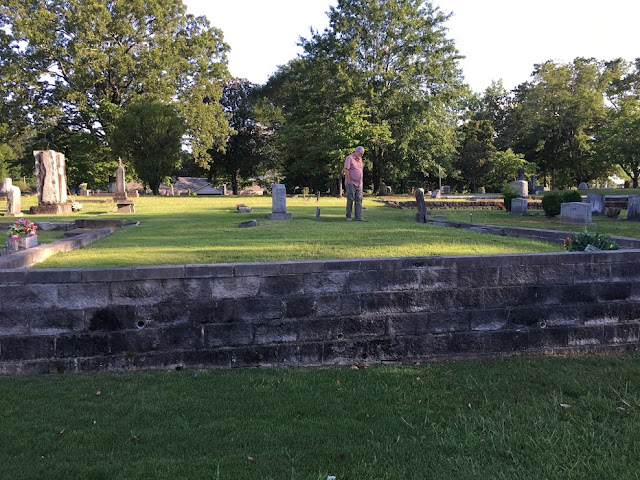 This area brother Richard is walking has a number of our Shores and Samford ancestors. 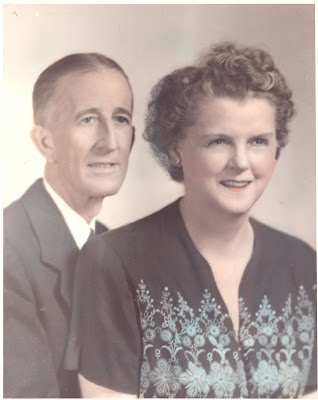 My maternal grandparents Tempe and John Miller Shores are both buried in this family plot. My grandmother died two months after I was born; mom says she got to see me before her death. 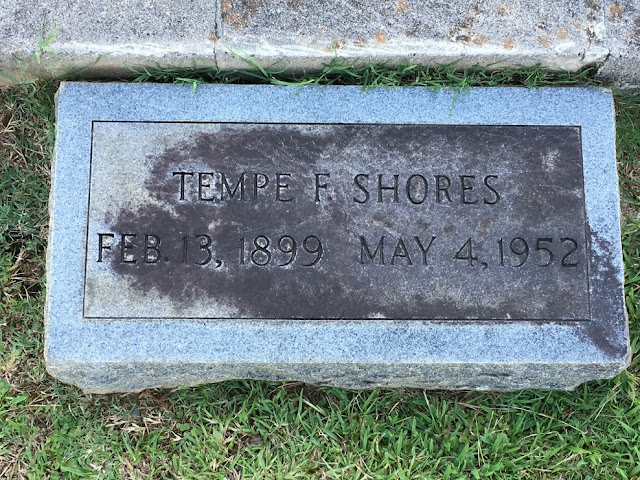 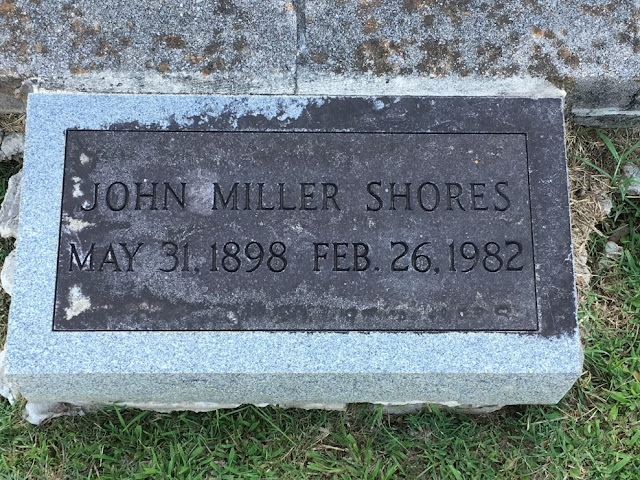 My grandfather served many years as a minister in the North Alabama Conference of the Methodist Church. 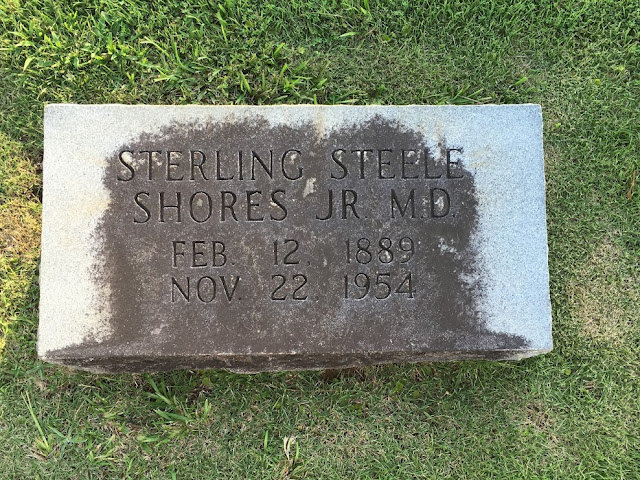 Another Shores ancestor practiced medicine in Alabama for many years. 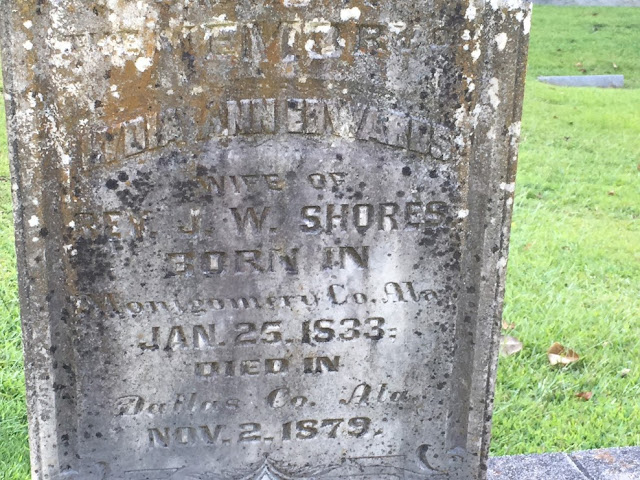 Lydia Ann Edwards [1833-1879] was the first wife of James Wilson Shores [1828-1918], another long-serving Methodist minister in the family. In the early part of his career he was a circuit rider, and the state archives has his journal for the 1850's. An excerpt can be read here. He and his second wife are buried in Montgomery.

Lydia was originally buried in a Dallas County cemetery that in recent years had been abandoned and become overgrown. Eventually several members of the family and an archaeologist disinterred her remains and moved them to this location in Jasper. Very little actually survived, but the broken gravestone came with them. That's another story I may tell one day. 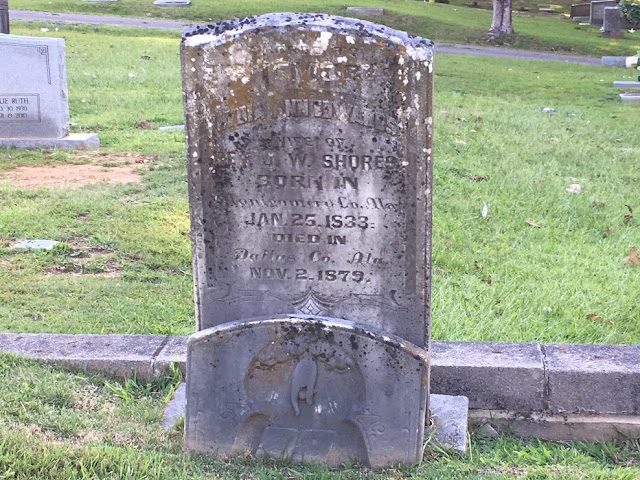