A Quick Visit to Hartselle

Each year my brother Richard and I take a trip together primarily to explore Alabama and family history. Our trip this past July ended in Hartselle, and this post examines a few things we found there. Comments on other stops: Bessemer & Jasper, Posey's Hardware in Jasper, Bug Tussle, and Colony.

Hartselle had about 14,000 people in the 2010 U.S. Census. The town has a nice historic downtown area which was added to the National Register of Historic Places in 1999. Notable natives include author William Bradford Huie, politician John Sparkman and various sports stars.

Incorporated in 1875, the town has some interesting history. The downtown area has rebounded from two major fires in 1901 and 1916. A Rosenwald school for black residents, built in the early 20th century, closed in 1969 and had to be demolished in 2000. Hartselle High School celebrated its 100th anniversary in 2009.

In March 1926, more than a dozen men stormed the bank, held hostages for four hours and then made off with $15,000 worth of cash, gold and silver. They used six sticks of dynamite to blow the bank's safe. The robbers were never identified; today the building is the home of a boutique.

In the late 1980's Hartselle was home to the "Tomb of Mystery Museum" operated by magician John Reed. The collection consisted of his personal magic materials and historical acquisitions over the years. I wonder whatever happened to those items.

We had a specific goal in mind for this Hartselle visit, but we also managed to see a few other things. All will be revealed in the comments below. 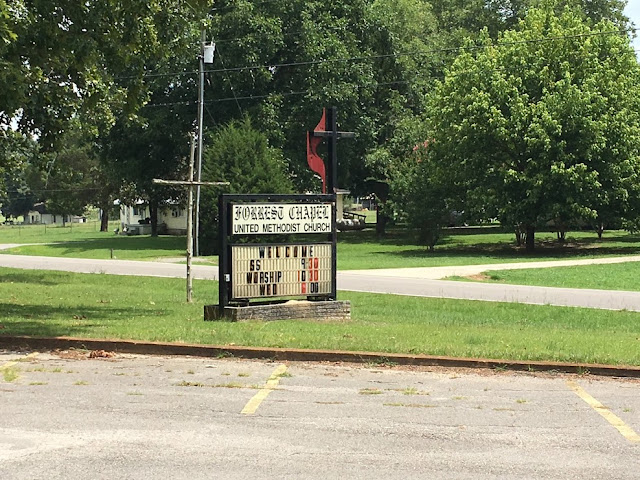 Back in June I posted an item about James Copeland, a Confederate veteran who once vowed never to cut his beard if the South lost. He kept his word, and his beard was said to be nearly seven feet long when he died. According to my research, he is buried in the cemetery adjacent to this Methodist church outside Hartselle. 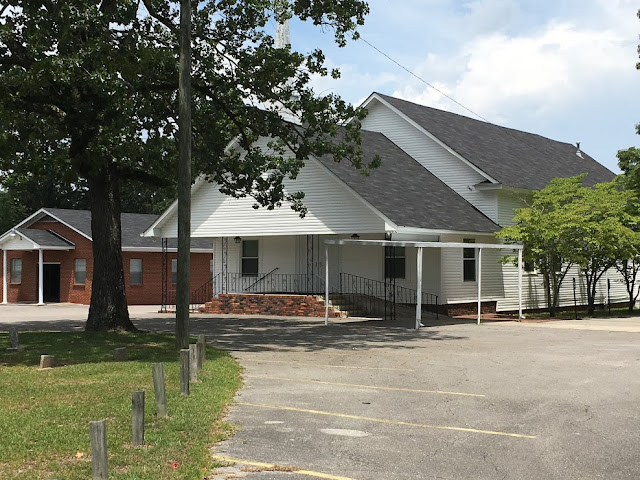 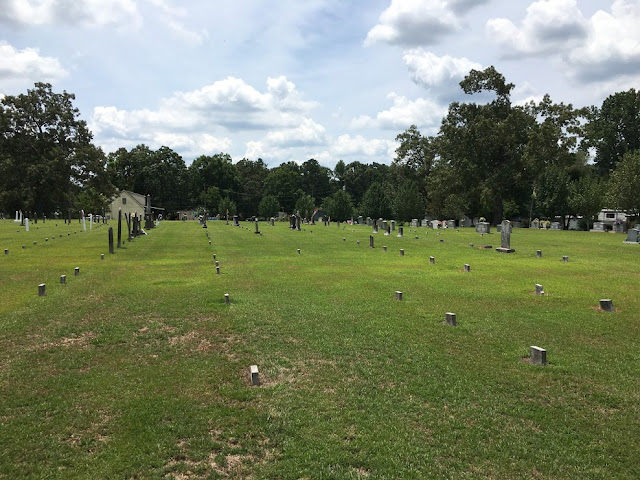 Richard and I spent a half hour roaming around the cemetery in the July heat hoping to find Mr. Copeland's grave. We didn't, but there are many unmarked graves here. As the marker below notes, the cemetery has graves going back to 1804, so it's worth visiting as historic itself. 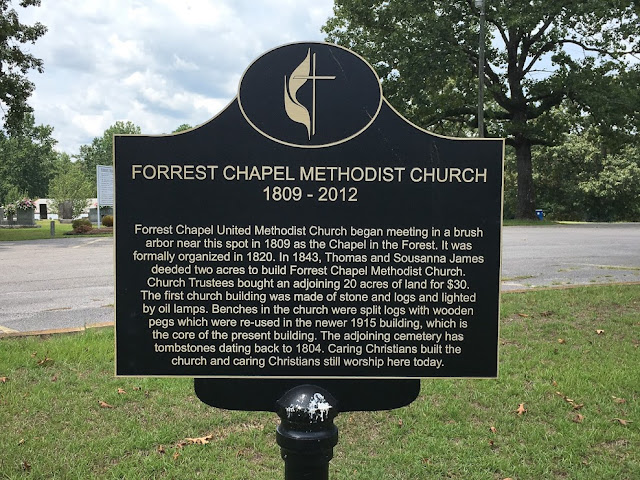 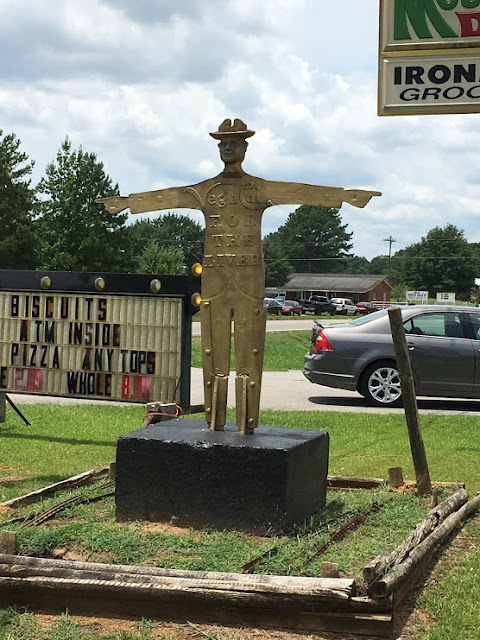 Like Birmingham, Hartselle has its iconic Iron Man. We found him on our way to the Methodist church. He's on Iron Man Road. At the Iron Man Grocery. In the Iron Man community, with an Iron Man Barber, too. The fellow has been around for a century or so and has survived various attacks of vandalism.

Iron Man was originally an advertisement for VegaCal. Bessemer pharmacist W.D. Taylor developed the liver tonic, and the iron man advertised his product. "VegaCal Gets the Bile" according to the slogan on his chest. Apparently several of these iron advertisements were made in Birmingham and scattered in the area. I wonder if any others have survived. 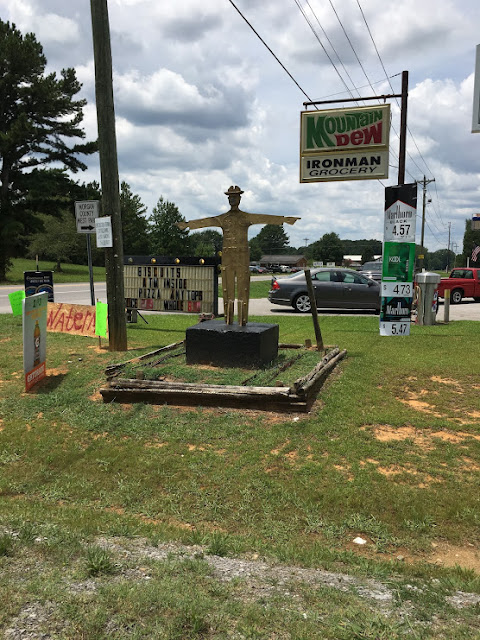 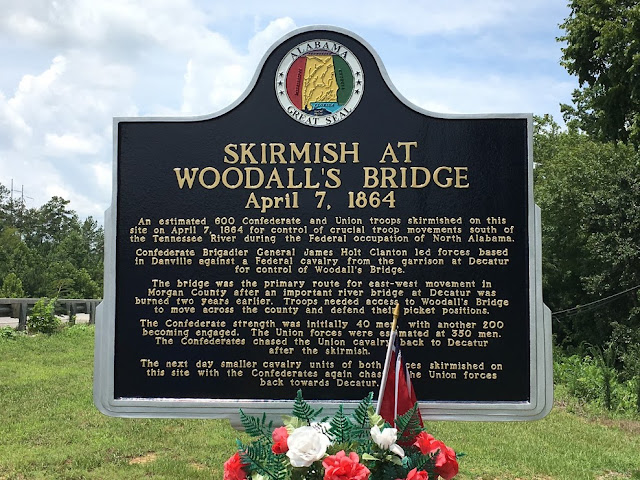 There is a Civil War site of significance in the area. 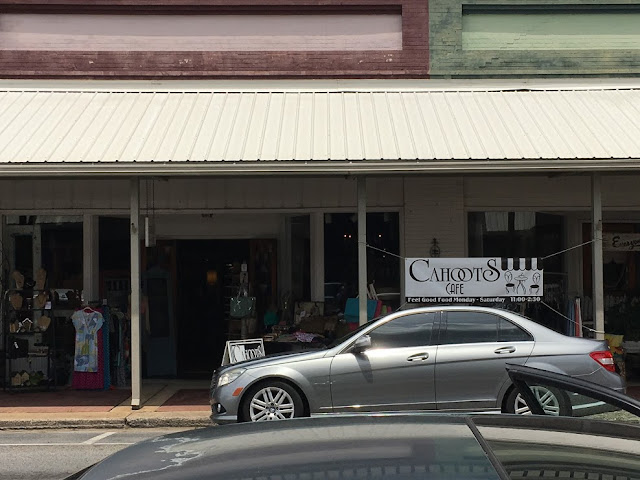 Richard and I had lunch at Cahoot's Cafe in downtown Hartselle, where I had a great Reuben sandwich. As you can see from the photo below, the place is packed with all sorts of neat historical stuff. 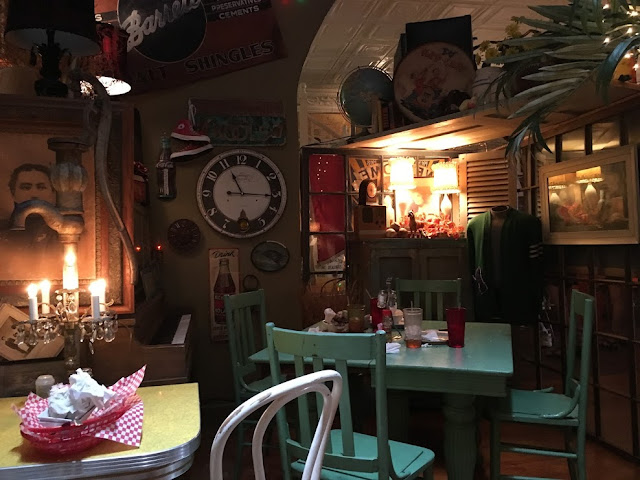 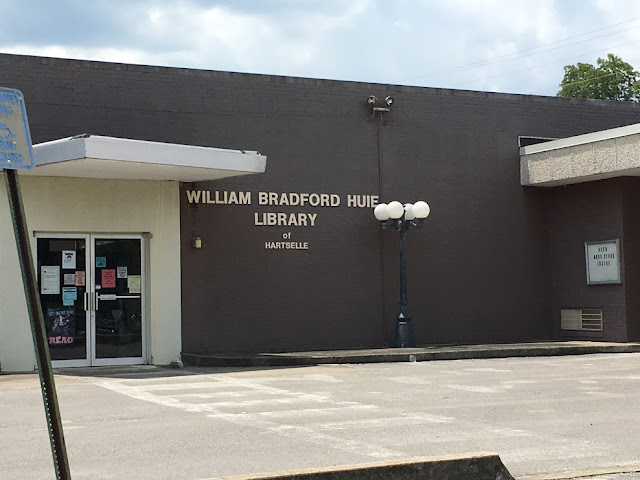 A few years ago the Hartselle Public Library was named after one of the city's most famous natives, William Bradford Huie. The journalist and novelist was a  very controversial figure during his lifetime, but returned to live in Hartselle in the mid-1950's. He is buried in the city cemetery.

This building seems to have been a bank at one time; that book drop area sure looks like a former drive through for one. 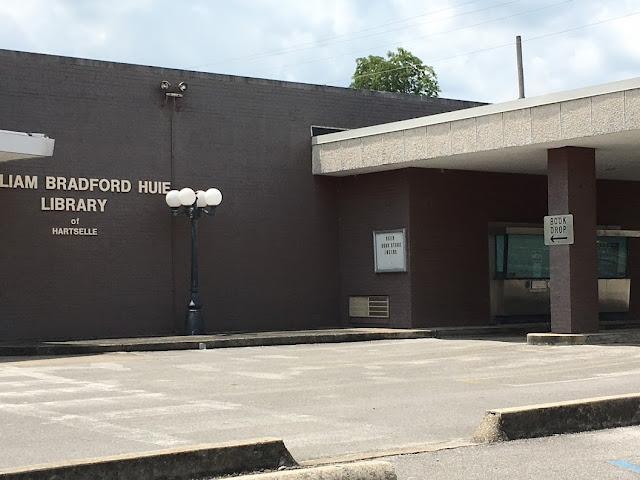 
Posted by AlabamaYesterdays at 10:34 AM